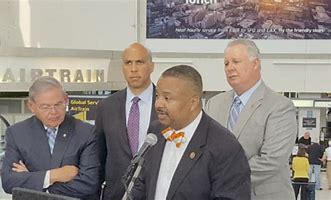 On Wednesday, the United States House of Representatives voted in favor of the $1.5 trillion, Moving Forward Act by a count of 233 to 188.  This massive, national infrastructure legislation would improve the country’s roads, rail and bridges.

Rep. Sires stated, “In the years I have served on the House Transportation & Infrastructure Committee, I have been working to give our states the resources they need to bring their transit infrastructure into the 21st century. Our states have the need, the know-how, and the labor to move on big infrastructure investments, all they lack is the federal financial help. As my constituents know, New Jersey has been working for years to finance its own major infrastructure effort, the Gateway Project, for years but has had to wait for years while the necessary federal commitment has been held hostage to political games.

“Today, I proudly voted for the Moving Forward Act, a bill I helped craft, to finally move the Gateway Project forward, to finance massive national road and bridge repair, to factor climate change and climate resilience into our infrastructure investments, and to create the national transportation infrastructure network we deserve.

“The Moving Forward Act is a huge step forward in national infrastructure financing. It puts over $9 billion into projects of national and regional significance, millions of dollars into national road and bridge repair, and for the first time provides billions of dollars for state programs that support carbon pollution reduction. I am proud to have helped craft this bill, to support it in our Committee, to speak in its support on the Floor of the House, and to vote for it.”

Rep. Payne issued the following statement.  “We need this bill to become law because the current Hudson River Tunnel needs to be repaired and work on a new tunnel needs to start immediately.  Everyone knows our roads and bridges are falling apart.  Once we have reopened safely, thousands of commuters are going to need a modern and safe New Jersey transit system.  In addition, this bill would create thousands of new jobs for Americans to improve our nation and make funding available to replace lead service lines in Newark’s water system.  Once again, I am proud of my Democratic colleagues for taking action to address our country’s needs.”

The bill would allocate almost $12 billion for New Jersey’s highway and transit improvements, as well as at least $7.6 billion for rail projects along the Northeast Corridor, such as the Hudson River Tunnel.  Also, it could help pay to replace Newark’s water distribution system because it contains an amendment to provide $22.5 billion for lead pipe replacement with a focus on low-income, minority communities.

The resolution now awaits review by the United States Senate.