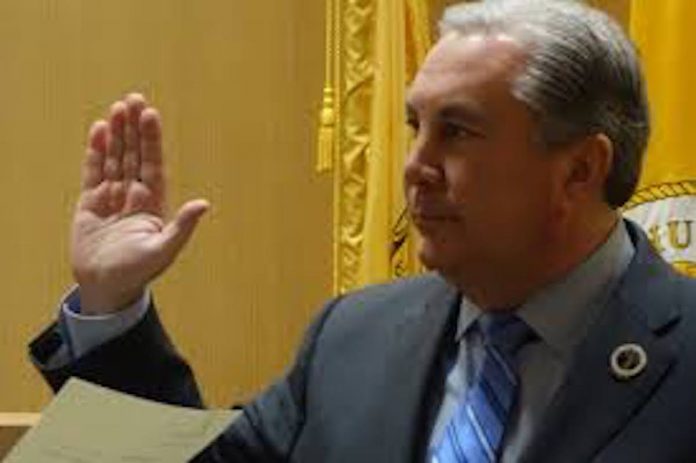 During a thirty minute, Hudson County Board of Commissioners’ reorganization meeting held this afternoon, the first since the name change from Freeholder, partially via Zoom and with a handful of the Commissioners in the Chambers on Pavonia Avenue in Jersey City, North Bergen’s Anthony Vainieri was once again selected by his colleagues as Chairman of the nine member, governing body.  Hoboken’s Anthony Romano replaced Jersey City’s Bill O’Dea as the Vice Chairman.  Both votes were 8-0-1, with Commissioner O’Dea abstaining each time.

Commissioner O’Dea, in a text to Hudson TV immediately following this afternoon’s reorganization stated, “I abstained on both because I received a call at 11 am from the Chair that I was being replaced as Vice Chairman. As someone with 23 years of service on the Board I would have expected a little more respect than that. Nothing personal against either of them. I hope it didn’t have anything to do with my opposition to ICE or concerns over the recent effort to curtail public speaking on the issue at our meeting.”

On being selected again by his fellow Commissioners to lead the Board, Chairman Vainieri told Hudson TV in a phone interview, “Both myself and “Stick” Romano called Commissioner O’Dea yesterday, but he did not answer his phone.  We both called him again this morning to let him know he was being replaced as Vice Chairman and he said he was watching football yesterday.  Besides, both Commissioners Romano and Walker, an African American, wanted an opportunity to move up.  The other members of the Board all wanted me to remain in the Chairman’s role.”

Commissioner Ken Kopacz of Bayonne informed the Board of the passing of former Freeholder Samuel Kaye.  A tribute for the Kaye family will be planned.

The next Commission caucus session is set for 4 pm on January 12, with the regular meeting slated for January 14 at 4 pm.