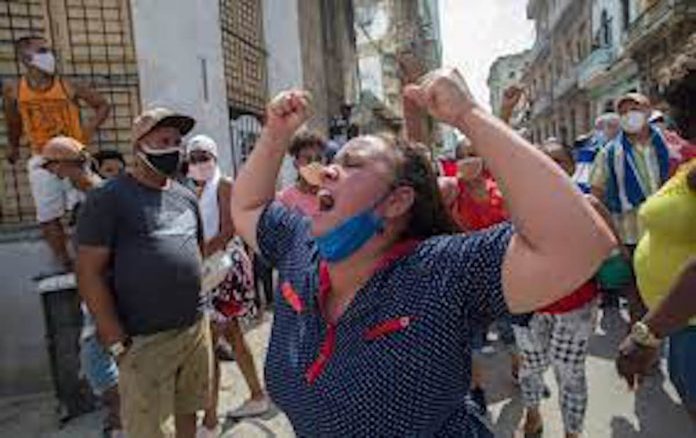 In a rare display of anti-government demonstrations, hundreds of protests broke out across Cuba on Sunday, as islanders expressed their outrage over the high cost of food, the overall lack of available foodstuffs amid the coronavirus crisis, and a basic lack of human rights.  Many young people in Havana disrupted traffic and threw rocks until police eventually broke up the protests after several hours.

Hundreds could be heard chanting “freedom,” “enough,” and “unite.”

In Hudson County, similar demonstrations broke out, as Cuban Americans took to local streets and parks in supports of their brothers and sisters on the island.

Hudson County Congressman Albio Sires, who came to the United States from Cuba in the early 1960s, joined with protestors in West New York demanding an end to the Cuban dictatorship.  Sires tweeted Sunday afternoon, “I stand with every Cuban on the street right now demanding their basic rights and rejecting the dictatorial Castro/@DiazCanelB regime.  I urge international journalists to cover the scenes we are witnessing right now in dozens of cities throughout #Cuba.”

Cuba is currently experiencing its worst economic crisis in decades.  There has been a spike in COVID-19 cases and the island nation is suffering the consequences of the United States-imposed sanctions implemented by former President Donald Trump.

An official in the Biden Administration tweeted support for the demonstrators on Sunday afternoon.