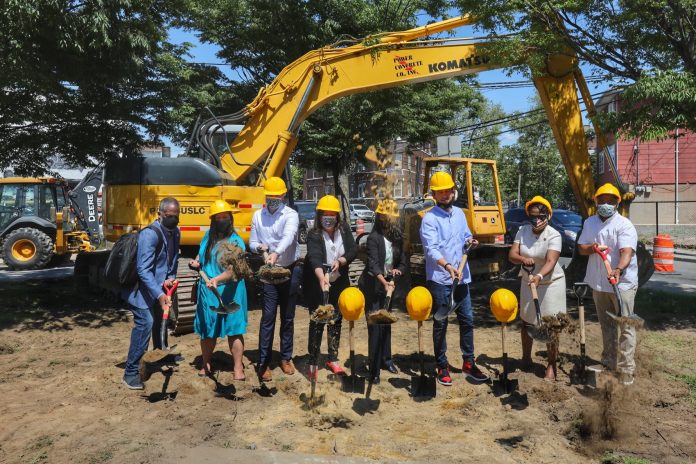 The renovation designs were developed with community input to include upgrading the playground area and installing a permanent infrastructure with new trees, plants, seating, restriping pedestrian crosswalks, fencing, a flag pole, among other elements for residents to enjoy the newly established public space safely. The reimagined Fairmount Park advances the administration’s goals by combining Vision Zero, placemaking, and sustainability efforts for a diverse intergenerational community in Ward F.

“Fairmount Triangle currently has streets cutting through the park, which renders the green space unusable for many local children and families.  We used the community’s input to realize the full potential of the open park space by reconfiguring two small portions of roadway and incorporating them into the park while maintaining all of the existing on-street parking,” said Mayor Fulop. “These upgrades will significantly improve safe access for pedestrians, which will attract more people to actually use the park for recreation and encourage a healthier, active lifestyle.”

With this groundbreaking, the City will fully incorporate the street space into the park, creating a unified park space and establishing a sidewalk around the park’s perimeter. Pedestrian traffic signal equipment will also be reconfigured to accommodate the new park and help pedestrians safely cross at nearby intersections. Eliminating the cut-through streets will improve traffic safety by reducing the number of conflict points between pedestrians and motorists.

“If you live near the Fairmont Triangle as I do, a walk to the nearest park with kids in tow can take 20-30 minutes! Having a safe outdoor space for our kids and community will be transformational. Even since its closure, the neighborhood families use the Fairmount Triangle every day. My kids and I have gotten to know many of our neighbors and their kids because of it,” said Summit Avenue resident Joey Sforza.

Jersey City’s Division of Transportation initiated the pavement-to-park pilot project in 2019 in alignment with Jersey City’s Vision Zero commitment to incorporate placemaking initiatives, which capitalize on local assets and potential, into transportation and traffic safety work.

Following the success of the City’s 2019 pilot program, which has remained in place since, the City conducted a traffic assessment and held numerous community meetings over the past year and a half to incorporate residents’ input into the new vision for a safer, more functional Fairmount Park.

“As this administration continues to invest in the Bergen-Lafayette section of Jersey City, we’re seeing critical development that is part of our overall efforts to revive and reaffirm the neighborhood as a destination for everyone from families to businesses.  Just across the street from the park, we have over 200 residential units being built. We expect the progress to continue, and the new and improved Fairmount Park is a key part of that,” said Ward F Councilman Jermaine Robinson.

The $200,000 Fairmount Park improvement project is equally funded through grants awarded to the City by Made to Move and the NJ Department of Transportation.

“This is a unique opportunity to integrate our Vision Zero efforts into several other citywide initiatives and establish a wonderful new park while maintaining traffic circulation and existing parking spaces. The advancement of this pavement-to-park project will reinvigorate Fairmount Triangle and provide additional space to gather, play, relax, and enjoy the neighborhood. We have also secured a grant from the New Jersey Department of Transportation to fund transit and pedestrian safety improvements on Fairmount Avenue, which will make it easier for the community to access the park without the use of a car,” said Barkha Patel, Jersey City’s Director of Transportation Planning.

Two strategies identified in the City’s Vision Zero Action Plan include (1) explore new pedestrian plaza locations in neighborhoods throughout the City and (2) pilot one placemaking initiative along Jersey City’s High Injury Network, which includes Summit Avenue. The City secured a grant for the project by the Made to Move program, funded by Blue Zones and the Degree Foundation. Jersey City is one of five municipalities nationwide awarded the grant to fund projects that promote healthy living and active transportation and serve as a model for other communities.

The improvements align with the City’s broader efforts to expand and improve neighborhood parks for all Jersey City residents. Through the first allocation of Jersey City’s Open Space Trust Fund, enacted under Mayor Fulop in 2016, over 20 additional park improvement projects spanning the City are underway or already completed.

“For Jersey City residents, parks and open spaces are a vital part of the community. This has been an exciting time for Jersey City.  Over the past two months, there have been several new parks and open space improvement projects that have been implemented or nearing completion throughout the City,” said Paula Mahayosnand, President of the Jersey City Parks Coalition. “The Parks Coalition is pleased to see the City’s continued commitment to invest and develop underutilized spaces into transformative green spaces. This park represents another step towards equitable access to green spaces in this neighborhood.”

The process of the entire park improvement project, from start to finish, will be published by Blue Zones to be used as case studies for what other municipalities around the nation can do to achieve similar success.

To further communication between the community and the municipality, monthly meetings are being held throughout the park’s construction process.  The next virtual meeting is scheduled on May 18th at 8 p.m.  Community members are encouraged to attend by joining the virtual meeting here.