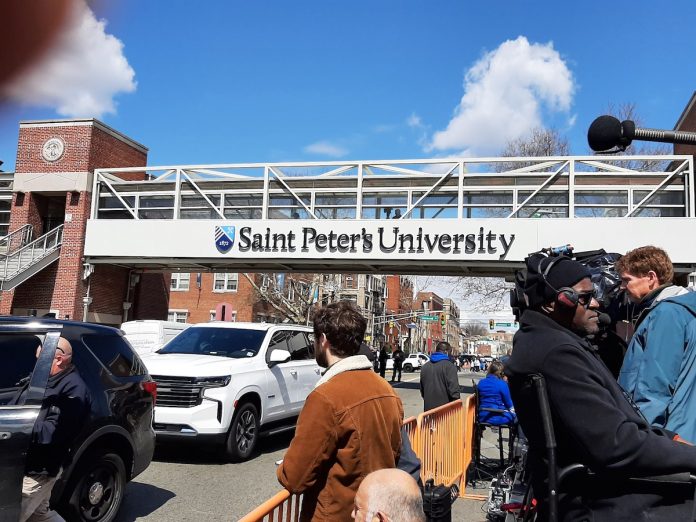 Kennedy Boulevard and Jersey City hosted a parade and rally in front of St. Peter’s University this afternoon, as Hudson County became Peacock Nation.  A parade and rally celebrating the Cinderella run made by the tiny university’s men’s basketball squad in the NCAA college basketball tournament drew a crowd of approximately 2,000 people by this reporter’s estimate.

The Peacocks made it all the way to the Elite 8, before falling to college basketball powerhouse North Carolina last weekend.  St. Peter’s University, a member of the MAC Conference, became the first 15 seed in tournament history to reach the Elite 8. 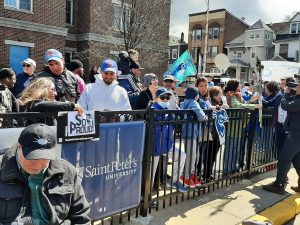 Today festivities featured public safety personnel participating in the parade, along with many of Jersey City’s high school marching bands.  But there was school representation from outside of Jersey City as well, with Weehawken, Hoboken and Bayonne among those in attendance. 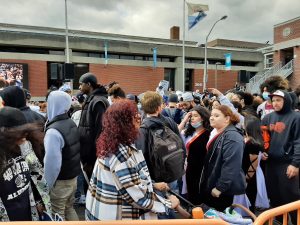 United States Senator Robert Menendez, a proud St. Peter’s graduate, spoke to the crowd, as did Jersey City Mayor Steven Fulop, the university’s President and members of the basketball, along with Coach Shaheen Holloway, who just yesterday signed a new contract with his Alma Mater, Seton Hall University to coach the Pirates.  All of the players were presented with keys to the city by Mayor Fulop.  A large key to the city will be housed at St. Peter’s as well.