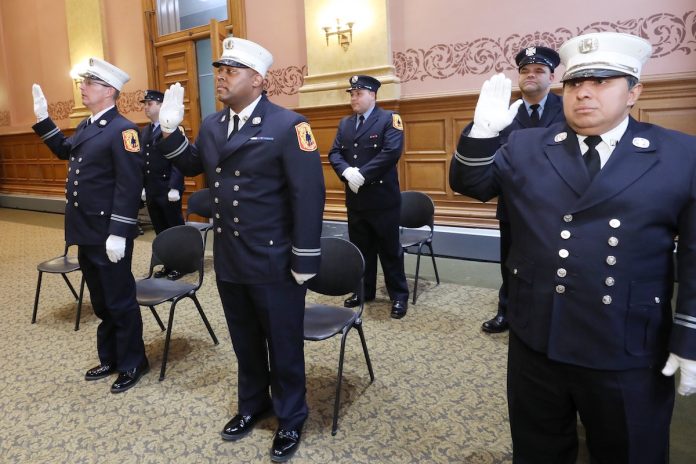 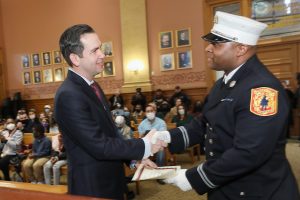 “Today is of special significance as one of our promoted Battalion Chiefs is the grandson of Jersey City’s first African American firefighter, Thomas Gerald Taylor,” said Mayor Fulop.

“This speaks volumes about the progress we’ve made, especially since we prioritized diversity recruitment over the past eight years.  In fact, six of the eight firefighters promoted today represent minority populations. I think it’s safe to say Firefighter Taylor would be very proud to see how far his grandson and Jersey City as a whole have come.” 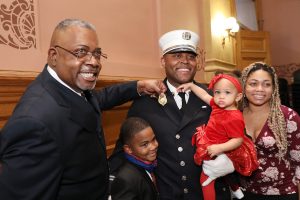 Dwayne Taylor, whose father was also a JCFD firefighter, is a third-generation firefighter in Jersey City. When his grandfather was hired in 1950, Thomas Gerald Taylor became the JCFD’s first African American firefighter, and he went on to be a co-founding member of the Vulcan Pioneers of New Jersey – a civic organization consisting of Black and other minority firefighters from northern New Jersey municipalities.

“I share this proud day with my family and community. It started with my grandfather breaking through boundaries as the first Black firefighter in one of New Jersey’s largest cities, and it continues today with me being promoted to Battalion Chief. It’s something my grandfather likely never imagined would happen 60 years later,” said Battalion Chief Dwayne Taylor. “I’m grateful for the opportunity to carry on my grandfather’s and father’s legacies by serving this great community.”

In total, four Captains and four Battalion Chiefs are being promoted during today’s ceremony – most of whom represent minority populations, including four Hispanic firefighters and two African American firefighters – as listed below:

“As we continue to strengthen our department with the best firefighters in the state, we need to include quality leadership throughout our firehouses citywide. Today’s promotions achieve exactly that. These new Captains and Battalion Chiefs have worked hard to get to where they are today, and we appreciate their commitment to serving Jersey City and keeping the community safe,” saidChief McGill.