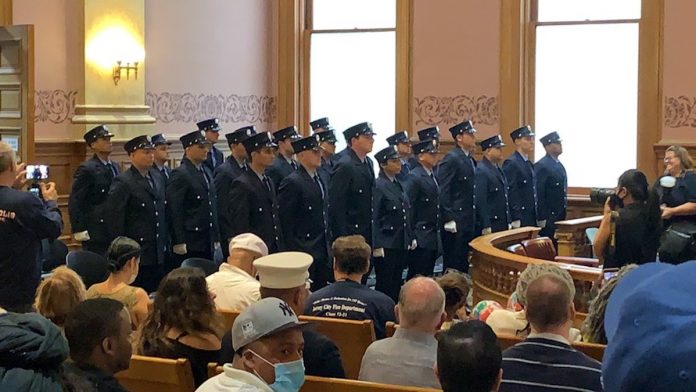 Mayor Steven M. Fulop, Public Safety Director James Shea, and Fire Chief Steven McGill swore in 25 new firefighters to the Jersey City Fire Department at an 11 o’clock ceremony in City Hall this morning, furthering the Administration’s efforts to increase public safety. It was the 72nd academy class in the history of Jersey City’s Fire Department, and the first class trained and certified as Emergency Medical Responders (EMR) at the Jersey City Medical Center. 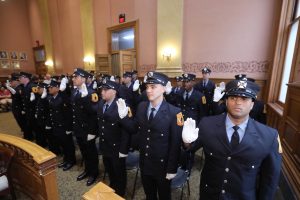 These latest recruits to join one of the largest fire departments in New Jersey marks the 23rd JCFD class sworn in since Mayor Fulop took office in 2013. Since then, 316 new firefighters have been hired, bringing the department to a historic total of over 650 uniformed firefighters and superiors.

“We’re extremely grateful to our newest firefighters taking on an awesome responsibility, and also to their families who are constant support systems throughout their careers,” said Mayor Fulop. “You are joining a tremendous fire department. One that is distinguished by always fulfilling the call of duty to our 250,000 residents and doing so in a way that makes Jersey City proud.”

This year, the JCFD is celebrating its 150th anniversary of providing professional firefighting services to the City of Jersey City.   Furthering the fire department’s tradition, this latest graduating class is comprised of multigenerational firefighters, including one recruit furthering the legacy of his grandfather and father as a Jersey City firefighter, four additional recruits following in their fathers’ footsteps, and two sets of recruits joining their brothers who are currently on the job.

The Fulop Administration has worked to enhance and expand fire prevention and protection for the entire community, especially as Jersey City’s population continues to grow. Since Mayor Fulop took office in 2013, each fire academy class is required to complete additional emergency medical certification courses, partially funded through federal SAFER grants.

“As Emergency Medical Responders, our firefighters are even more prepared and equipped to provide initial emergency care in medical emergencies, providing additional levels of aid in situations where every second counts,” said JCFD Chief McGill.

The additional firefighters have helped to fill the department gaps inherited by Mayor Fulop in 2013 when an average of four firehouses were put off duty every shift due to inadequate staffing levels, ultimately risking the lives of Jersey City residents. Since the Administration made it a priority to fix the issue, every single firehouse is fully staffed and providing the necessary, and often lifesaving, response coverage citywide 24 hours a day, seven days a week.

“We continue to focus on furthering public safety, a major component of which is providing the best fire protection possible for our entire community,” said Director Shea. “This latest recruit class was hired in the middle of the pandemic, and following all safety protocols with diligence, no recruit contracted COVID throughout the 18 weeks of academy training.”

As part of the Fulop Administration’s continued investments in improving public safety, just two weeks ago, Mayor Fulop broke ground on Jersey City’s first new firehouse in 20 years. The $5.6 million state-of-the-art firehouse is located in one of Jersey City’s most densely populated areas, the Bergen-Lafayette neighborhood, expanding public safety with a newly equipped and modernized firehouse to enhance safety for our brave firefighters and the greater public.