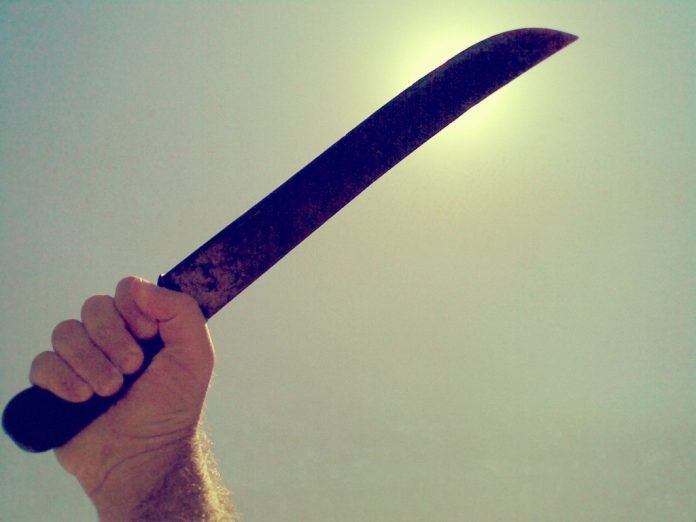 Incident Details:  On Thursday, May 21, 2020, at about 12:01 AM, Officer Daniel Grossi was flagged down by a female in the area of 1st and Washington Street. She pointed to a male and reported that he was in possession of a machete. Officer Grossi exited his patrol car and approached the male. Officer Grossi observed the male holding a machete in his right hand. Officer Grossi displayed his service weapon and ordered the male to drop the machete. The male complied and he was ordered to sit on the ground. The following officers responded as backup: Officers Joseph Spano, Officer Tyler Soto, Officer Geovanni Cruzado, Officer Marvin DeJesus, Officer Brandon Fitzgibbons, and Sergeant Roary Miller.

At this time the male was identified as Salvatore Spadafora 54 y/o Male from Jersey City, NJ. It was learned through on scene investigation that Spadafora was in an argument with an unknown male in the area of Newark and Washington Street. The argument escalated when Spadafora produced a machete from his pants resulting in the unknown male to run away north on Washington Street. Spadafora was observed holding the machete above his head as he chased after the unknown male. It was also reported that Spadafora swung the machete and struck a parked vehicle. The unknown male was not found. Spadafora was placed under arrest and charged with Aggravated Assault, Terroristic Threats, Possession of Weapons for Unlawful Purpose, Unlawful Possession of Weapons, and Criminal Mischief. Spadafora’s charges were placed on a warrant and he was committed to the Hudson County Correctional Facility.