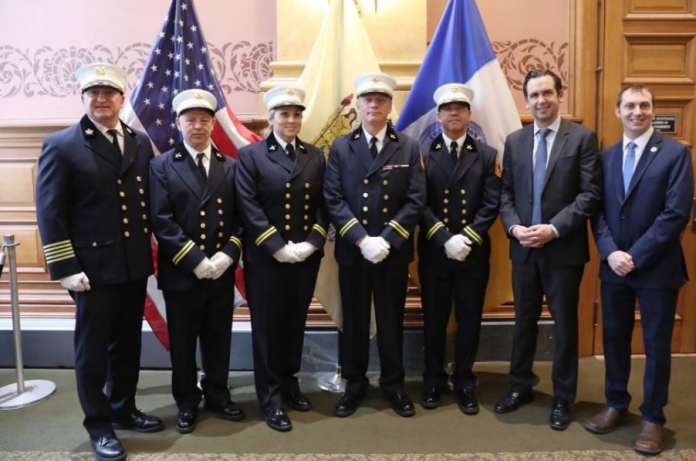 “As the most diverse city in the nation and the largest municipal fire department in the state, we recognized early on that we needed to add more diverse representation throughout all ranks and so I am especially proud to swear in Deputy Chief Zappella as she is a true trailblazer and an inspiration to our youth in Jersey City and beyond,” said Mayor Fulop.  “Congratulations to all four of our new Deputy Chiefs who have worked very hard over the past two decades to support one another and keep our community safe.”

Born and raised in Jersey City, Constance Zappella has deep roots in the community where she most recently worked as Battalion Chief in the Greenville neighborhood.

“I am no longer the young girl who sought to change a century of outdated tradition.  I am now humbled and honored to serve as the highest-ranking professional female fire officer in the state and city where I was born and raised,” Deputy Chief Constance Zappella said of her historic promotion.  “The difference between my success and failure is the network of people I built who supported me throughout my journey.”

As the first female firefighter to join the Jersey City Fire Department, Deputy Chief Zappella has been a pioneer from the start of her career in 2003, working her way up the ranks to become a role model and pioneer for other females and minorities.  As a result of Mayor Fulop’s diversity recruitment efforts, for the first time in the fire department’s history, minority populations are now represented in every rank department-wide.  To date, there are 17 females on the Jersey City Fire Department, including Constance’s sister, Francesca, who was sworn in two years ago.

“With a combined total of 80-plus years of service protecting the Jersey City community, we are grateful for all four of our new Deputy Chiefs who have earned today’s promotion.  The more diversity we achieve throughout our ranks, the stronger we become as a fire department overall.  Deputy Chief Zappella is a shining example of how hard work and perseverance pays off,” said JCFD Chief McGill.