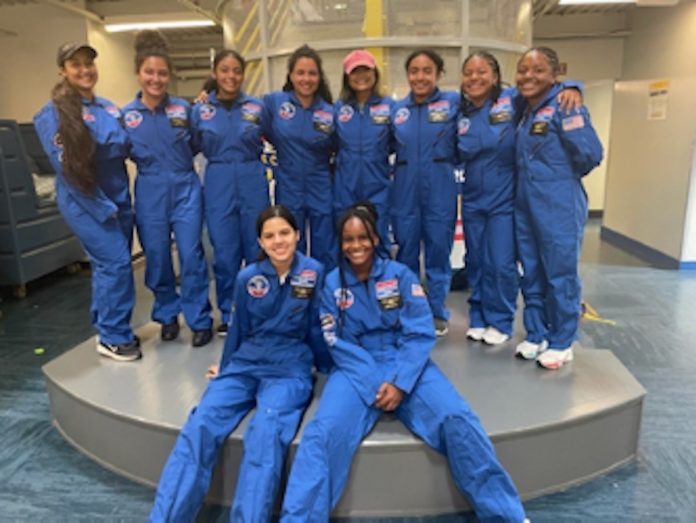 Students from Hudson Catholic Regional High School and St. Peter’s Preparatory School in Jersey City were among 13 teenagers who received a once-in-a-lifetime opportunity to attend the U.S. Space Camp in Alabama thanks to an extraordinary scholarship program from the Scholarship Fund for Inner-City Children.

The Scholarship Fund for Inner-City Children (SFIC), a partner of the Archdiocese of Newark, celebrated the 25th anniversary of its Summer Space Camp Program by sending its largest and most extraordinary class yet to the prestigious Advanced Space Camp at the U.S. Space & Rocket Center in Huntsville, Alabama. 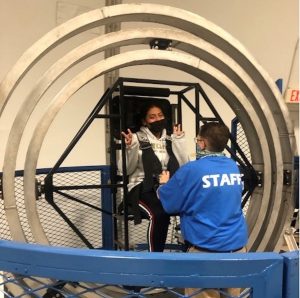 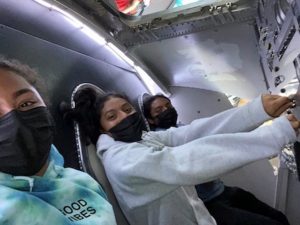 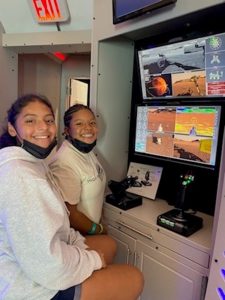 This year’s class was particularly unique because it marked the first time a set of triplets and twins were selected for the program. Additionally, a record 10 of the 13 scholarship recipients were girls, which is significant considering the U.S. Census Bureau found women made up only 27% of all STEM workers in 2019.

“STEM education is so important in today’s world, so we love providing this opportunity to students who deserve to attend Space Camp but might not have been able to go without a scholarship,” said Jasmin Roman, SFIC’s director of scholarship programs. “Space Camp is beneficial for the students. Every year, we see a big difference in their confidence and self-assurance when they come back. And it’s just a lot of fun for them.”

Each teen was selected through a highly competitive process in which applicants submitted their grades, a teacher recommendation, and an essay describing how STEM has sparked their creativity and imagination. The 13 chosen to attend Space Camp enjoyed one week of high-level educational and teambuilding activities, including building a rocket, flying jet aircraft simulators, and completing an extended-duration Mars mission simulation. They also got a sense of how it feels to be an astronaut by experiencing the 1/6th Gravity Chair and the Multi-Axis Trainer, which simulates a spacecraft or aircraft tumble.

Such experiences are made possible by Mark and Kathy Walchak, former archdiocesan parishioners now residing in Florida, who created the SFIC Summer Space Camp Program after seeing how Space Camp benefited their daughter. The Walchaks’ scholarships have allowed approximately 150 financially-underprivileged teens to attend Space Camp since 1996. Many of these recipients have pursued careers in STEM fields, with two even joining NASA’s Mars Exploration Program.

“Not too many students get to go to Space Camp, and some of the ones we’ve sent had never even been on a plane before, so it’s really a once-in-a-lifetime experience for them,” said Mark Walchak. He attended St. Teresa of Avila Parish in Summit with his wife Kathy for many years. “But it can lead to much more. There are so many careers related to the space program they can pursue. I hope this experience inspires them to at least think about going into engineering or joining the medical field or even becoming an astronaut.”

To learn more about SFIC and its scholarships, visit https://www.sficnj.org/.

About the Scholarship Fund for Inner-City Children
SFIC, founded in 1983 as the Fund for Educational Advancement, is a non-profit organization funded by corporations, foundations, and individual donors who wish to invest in the future of economically-disadvantaged children living in neighboring communities. The fund has provided more than $54 million in partial-tuition assistance to students from economically-disadvantaged socio-economic backgrounds within Bergen, Essex, Hudson, and Union counties. Scholarships are based on need without regard to religion, gender, race, or ethnic background. Applicant families must be ready to provide proof of income and must intend to attend one of the schools within the four counties it serves.

About the Archdiocese of Newark

The Archdiocese of Newark serves approximately 1.3 million Catholics who reside in the 511 square miles of the four counties it serves: Bergen, Essex, Hudson, and Union counties. Comprised of 212 Catholic parishes and 74 primary and secondary Catholic schools, the Archdiocese is shepherded by Cardinal Joseph W. Tobin, C.Ss.R. He was appointed Archbishop of Newark on November 7, 2016, and elevated to Cardinal by the Holy Father, Pope Francis, on November 19, 2016. Cardinal Tobin was installed as Archbishop of Newark on January 6, 2017. To learn more, visit www.rcan.org.