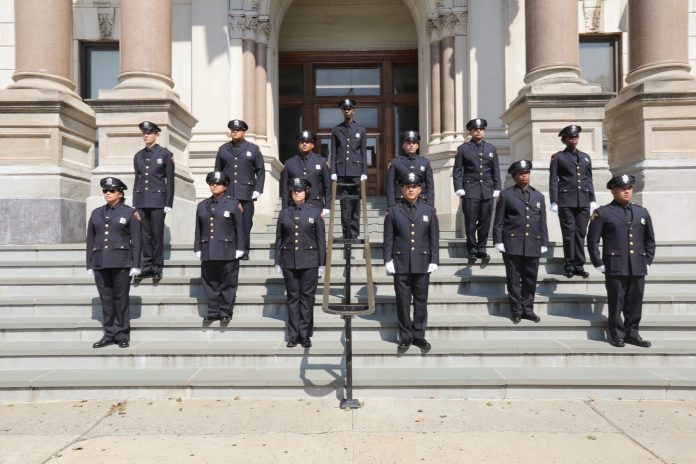 On Thursday at the City Council Chambers in City Hall, the Jersey City Police Department welcomed 15 new members to the city’s finest, as recruits took their oaths of office before family, friends and city officials.

Details on yesterday’s ceremony are provided in the following press release:

The Fulop administration has made diversity recruitment a top priority, and as a result, 70-percent of the new officers hired since 2013 have been minorities.

“From the mass shooting we faced in December to the challenges through the pandemic, the Jersey City Police Department is amongst the best in the country,” said Mayor Fulop. “Our police officers have built strong bonds in the community, and working together we have been able to drive violent crime down to historic lows.”

Last year, the City of Jersey City had its lowest homicide rate in 40 years.

These recruits joined the academy on December 9, 2019 and completed the full 6 months of training, the last 6 weeks of which was done virtually. When the academy was closed for several weeks due to the pandemic, the recruits volunteered to be on the frontlines assisting with operations at the city-run testing site outside of Public Safety Headquarters.  The newest first responders experienced firsthand what it’s like to help the community during difficult times.

“These recruits have already been on the frontlines assisting the Police Department in critical situations.  Just days after starting the academy, they assisted with Detective Seal’s funeral, and more recently they helped facilitate operations at the city-run testing sites while the academy was closed for several weeks during the peak of the pandemic,” said Director Shea.  “While they’ve already experienced more than most recruits, I know they’re eager to get out into the community.”

Under Mayor Fulop, a total of 620 police officers have been hired, growing the department from merely 769 officers in 2013 to 950 officers today. The Administration has placed an emphasis on diversifying the ranks to better reflect the community it serves while restructuring the department to enhance public safety citywide.