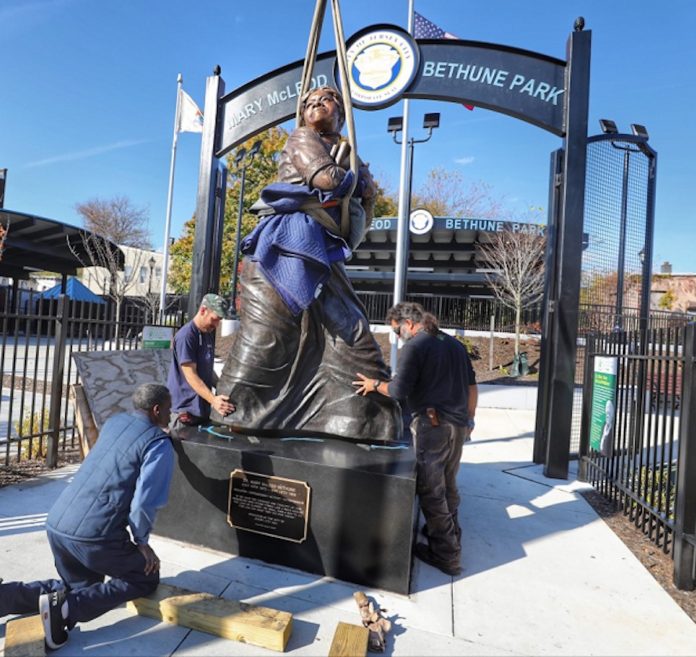 Following decades of talk and little action to move the park project forward, the Fulop Administration prioritized construction and officially opened the new Bethune Park to the public in August. The park is already widely utilized by neighborhood residents and is a valued extension of the Bethune Community Center located across the street, allowing for more outdoor community-centric programming.

“This monument not only pays homage to a historic civil rights leader, but it also completes the much-needed park to signify a promising future where children now play together on the new playground, neighbors can bond at the gaming tables, and live music and other events in the amphitheater foster community,” said Mayor Fulop.

“This pandemic has emphasized the growing need for accessible outdoor space to allow for more passive recreation and community events. That is exactly what Bethune Park provides to our Greenville residents and all of Jersey City.  Additionally, this statue of Ms. Bethune puts a special focus on the importance of education and perseverance, which will empower our residents now and for generations to come,” said Council President Joyce Watterman.

Bethune Center Director Alvin Petit designed the monument in a way that makes Jersey City’s ode to the civil rights activist unique from other Bethune monuments found throughout the nation where she is often portrayed in her senior years.  Instead, the Jersey City sculpture is inspired by a younger version of Bethune in her late 20s to early 30s.  The statue of the monumental figure stands strategically in the park’s main entrance as a focal point of the new Bethune Park with the intention of sparking curiosity amongst viewers to engage further into her legacy and contributions to the Jersey City community.

“Upon my appointment as director of the Mary McLeod Bethune Life Center in 2013, I noticed a lack of representation of the historic civil rights leader within the very facility that bears her namesake. I felt it was important for there to be an appropriate centerpiece to help brand the location as the community hub that it has become,” said Alvin Petit, Director of the Bethune Center. “In addition, the development of the new Bethune Park provided the perfect opportunity to create something on a much grander scale than previously envisioned. As a broader significance, this also plays a role in linking our City with a national movement to erect monuments that symbolize diversity and inclusiveness. This will be the first statue in Jersey City to honor the legacy of an African American woman. As an artist, I am grateful to have been given the opportunity to create such a lasting contribution to the city in which I have called home for 30 years.”

The Mary McLeod Bethune statue is depicted embracing several books as a symbol of her passion for knowledge and education as well as her legendary determination not to allow anyone to deny her of it.  Her facial expression embodies both her nature of defiance and optimism.  The positioning of her body with her head turned east has her facing the rising sun and protectively overlooking the Bethune Center facility.

“This Mary McLeod Bethune monument will empower residents and visitors alike and encourage people of every age and ethnicity to embrace education and stand up for one’s rights,” said Chairperson of the Open Space Trust Fund Committee and Ward B Councilwoman, Mira Prinz-Arey.  “This is a great way to pay tribute to Mary McLeod Bethune, someone who is important to Jersey City, while also bringing art into our public spaces with this sculpture.”

The newly constructed $3.5 million Bethune Park, funded by a Community Development Block Grant and capital funding, includes an amphitheater/concert stage, open-air pavilion, shaded seating area, gaming tables, a playground, and exercise equipment. The park can be used for recreation, celebrations, farmers’ markets, and other community events. A new parking lot with electric vehicle charging stations was also built nearby to preserve the existing supply of parking.