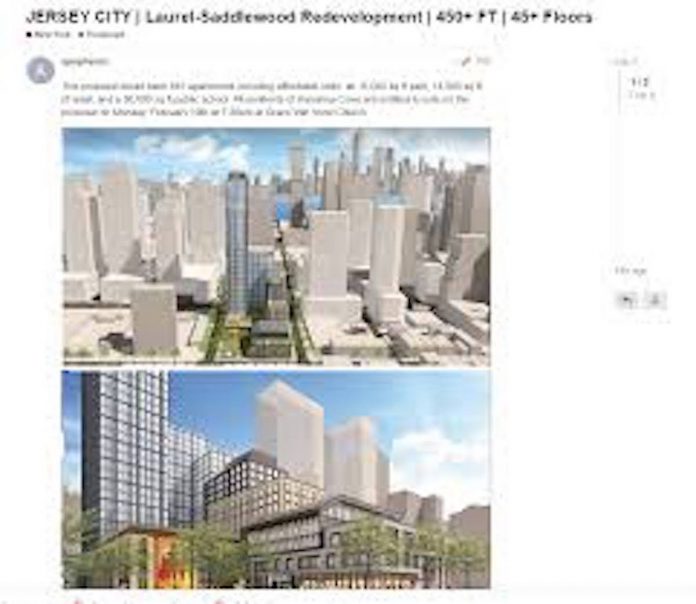 JERSEY CITY – Mayor Steven M. Fulop joins City Council members to announce the approval to move forward with the Laurel and Saddlewood Court project as passed 7-1 by the municipal council on Thursday night. Construction will include over 800 residential units, of which 5% is mandated affordable housing, as well as major onsite stormwater capture improvements, a public park, and a new 50,000 square-foot public school for PreK-5 students – valued at nearly $25 million, at no cost to taxpayers.

Jersey City is the only municipality in New Jersey successfully establishing innovative approaches to build new schools at the developer’s expense, despite the state’s struggle to provide adequate funding to schools for all New Jersey students. In fact, this is the third school to be built under Mayor Fulop’s directive to leverage development and the private sector, expanding the scope of construction projects to incorporate key community benefits.

“Just days after announcing the public-private partnership for the creation of the new innovative Liberty Science High School, we’re already moving forward on another brand-new school to alleviate the school system’s overcrowding and long waitlists, and further our efforts to provide top-quality educational opportunities for our youth,” said Mayor Fulop. “It’s important for us to ensure our community benefits from these projects, and this is the latest example of how we’re becoming a national model for smart growth.”

“Downtown Jersey City’s elementary schools are already overcrowded…and that’s before up to 10,000 new homes will be built here in the next five years,” said Ward E Councilman James Solomon. “The transit-oriented Laurel-Saddlewood development will address that infrastructure challenge by building a new, public elementary school for up to 400 students. And it will do so without costing taxpayers a cent.”

The developer, Lennar Multifamily Communities (LMC), will be responsible for the construction of the new school as well as the public park, valued at $2.5 million, and will incorporate stormwater capture improvements to minimize runoff.

The approved amendment also requires the development to set aside no less than 5% workforce housing, as defined by the U.S. Department of Housing and Urban Development (HUD).

“As homeowners on Laurel and Saddlewood Court, we fully support this project. We have come together, with LMC as our partner, to have this development project succeed. Beyond our personal interests in the project, we are longtime residents who have witnessed the neighborhood evolve, many of us plan to stay in the neighborhood, and we remain committed to seeing Jersey City grow and prosper,” said Andrew Prokos of Laurelwood Owners LLC. “We believe the proposed development will further enhance downtown Jersey City for all who live here, by providing additional affordable housing, a much-needed public school, infrastructure improvements, and greatly expanded green space.”

“This site will be transformed to serve not only the residential units being built, but also the surrounding neighborhood and the city as a whole, which is exemplary of what economic development can accomplish,” concluded Council President Joyce Watterman.