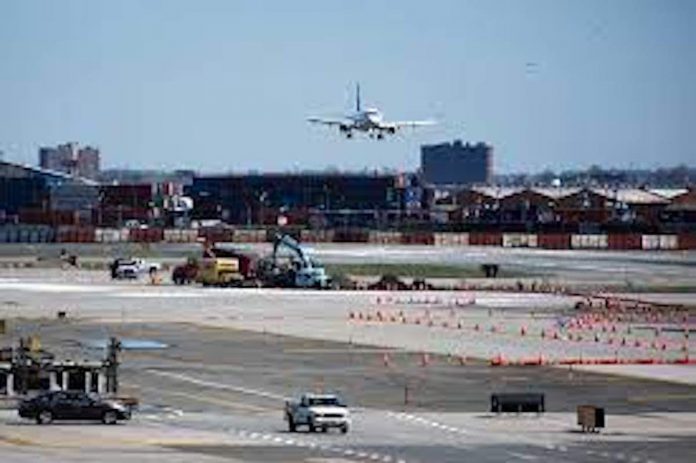 In an ongoing effort to maintain the highest-quality airport infrastructure and reduce flight delays, the Port Authority of New York and New Jersey this week is beginning the rehabilitation of one of Newark Liberty International Airport’s major runways.

Before the pandemic, Runway 4R-22L, which serves as a primary landing runway at Newark Liberty, handled nearly 47 percent of the airport’s flight activity. Last rehabilitated in 2012, the runway has shown surface deterioration due to normal wear associated with use. The rehabilitation cycle for runways is typically eight to 10 years. Work on this project is expected to be completed by the end of the second quarter of 2022.

“This project will provide a welcome boost across the region by creating badly needed new jobs and energizing the economy as we continue to recover from the impacts of COVID-19,” said Port Authority Chairman Kevin O’Toole.

“Maintaining runways in top-flight condition is the lifeblood of our airports and essential to keeping our facilities operating at the highest level,” said Port Authority Executive Director Rick Cotton. “We are committed to ensuring that all of our airports continue to provide best-in-class facilities, services and operations for our customers and our airlines.

Newark Liberty is one of the nation’s busiest airports, serving as a key international gateway to New Jersey and the region. In 2019, the airport handled 46.5 million air passengers.

The project’s scope includes the milling and repaving with asphalt of the runway surface as well as the renovation of runway shoulders and intersecting taxiways, coupled with the complete replacement of the electrical infrastructure and adding new light fixtures. In addition, the project will provide totally new pavement and new signage across the runway.

The estimated total project cost of $84.2 million includes an estimated $50 million for construction with additional spending on planning, engineering, and other elements of the project. Capital spending on the project will serve to create new jobs, as well as to support existing jobs. Total economic activity for this project is projected to be 783 total job years and nearly $60 million in total payroll wages.

To accommodate future passenger growth at the airport, the Port Authority has embarked on a transformational project, beginning in 2017 with the start of construction for a new $2.7-billion terminal to replace the existing Terminal A. The project also includes a new state-of-the-art, consolidated rent-a-car center (ConRAC) facility and expanded parking garage, which will accommodate multiple rental car agencies at one convenient location and provide 2,750 additional public parking spaces adjacent to the new terminal. In 2019, the Port Authority added funding for planning for the potential replacement of Terminal B to its 2017-2026 Capital Plan.