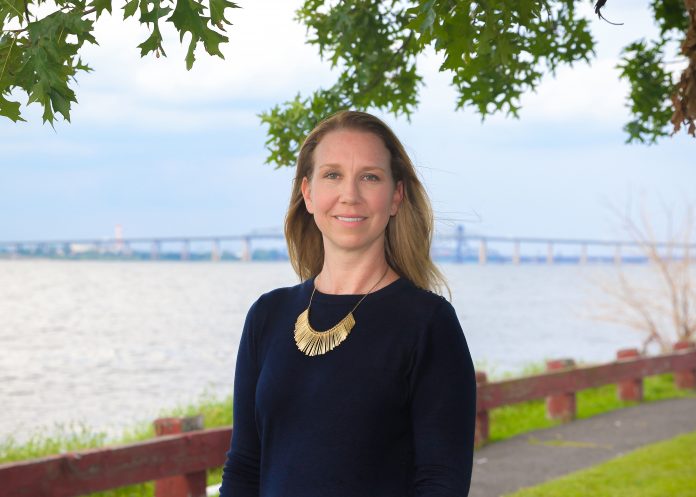 Mayor Jimmy Davis nominated Melissa Mathews to serve as Bayonne’s
Business Administrator, effective May 1, 2020, to replace Terrence Malloy, who
will be retiring on April 30 after thirty-eight years of service to the City. The City
Council approved the nomination unanimously at its meeting on March 18.
Mayor Davis said, “Melissa Mathews is highly qualified to serve as our new
Business Administrator. She has excellent educational credentials and experience
in planning and zoning, investment banking, technology, non-profit organizations,
and community activities. I am very proud to appoint her as the first woman to
serve as Business Administrator for the City of Bayonne.”
Ms. Mathews studied at Columbia University in Manhattan, where she
earned a degree in Political Science with a focus in Economic Development. Her
coursework included classes in Economics, American Political Structures, welfare
systems, inner city politics, game theory, Philosophy, French, Media, and Creative
Writing. She studied abroad for a semester at the University of Ghana in West
Africa. While there, she specialized in Economic Development in Sub-Saharan
Africa. She took additional courses in Local Governance, Political Sector
Reforms, African History, and African Philosophy.
​
Ms. Mathews has worked for the City of Bayonne for a year on the staff of
the Planning and Zoning Division. She worked directly with the Zoning Officer on
reviewing permit applications, issuing permits and denials, and performing
inspections. She streamlined zoning information into understandable packets to
assist the public in navigating frequently encountered zoning issues.
For five years, Ms. Mathews worked in investment banking as an Equity
Research Assistant at Citigroup and Credit Suisse. She wrote research reports,
maintained financial models, and worked directly with research analysts and
management on economic sectors and individual stocks. For four years, she
worked in the technology industry for Apple Computers and Adobe Systems on
operating system and software development.
She established the Mathews Foundation, which has sponsored various
educational and community projects in Bayonne. Her foundation started sign
language classes at the Bayonne Public Library. Ms. Mathews serves as Co-
President of Grow Bayonne, a community gardening program. She is working
with the Bayonne Department of Public Works on the layout and design of a large
community garden. She is working with members of the Board of Education on
developing a gardening-related curriculum.
​
Melissa Mathews has lived in Bayonne for five years. She is married and is
the mother of four children.
​

West New York: 77 People with Coronavirus according to spokesperson