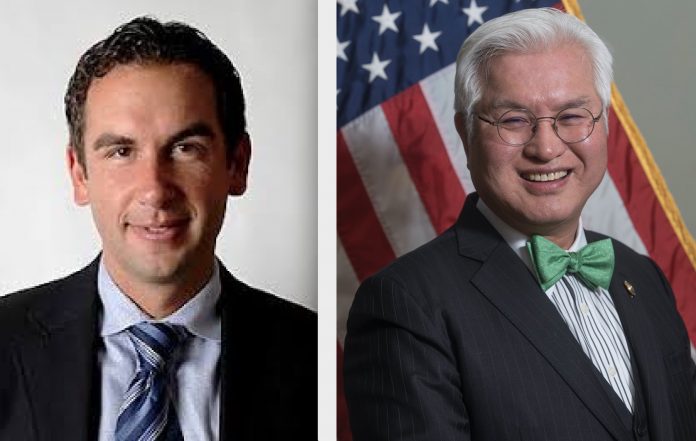 JERSEY CITY – Mayor Steven M. Fulop and Ward D Councilman Michael Yun announce a comprehensive plan crafted to take immediate steps towards fixing the historic budget gap the Board of Education is currently faced with. Under the Jersey City School Funding Action Plan, Mayor Fulop and Councilman Yun outline a detailed agenda to avoid massive tax increases, while providing $250 million in net gain directly into the city’s public schools budget over the next 3 years to provide a stable stream of revenue for the BOE.

“We have always said that we would do our part and show leadership by putting forward a plan. This plan corrects decades of mismanagement from previous administrations, and builds towards providing 100% of the tax abatement revenue that the schools would receive under conventional taxes,” said Mayor Fulop.  “The students and teachers are the number one priority here. The next step is we need a basic action plan from the Board of Education.  This plan from the city will deliver $250 million dollars towards fixing our public schools.”

Over the last several months, Mayor Fulop and Councilman Yun have been meeting with stakeholders including parents, teachers, and the BOE administration to develop a comprehensive strategy. The School Funding Action Plan is a 3-year commitment that incorporates new revenues from operational efficiencies, payroll taxes, and a manageable assessment of building a stronger tax levy without hurting people on fixed incomes.

“We’ve been working proactively to come up with this fair and balanced funding plan where the city is offering to make strategic adjustments to assist the schools with their current budget crisis,” said Councilman Yun. “These proposed solutions are tough decisions we’re making on the city budget side, but they are necessary.”

As part of the Board of Education’s forensic audit recommendations, Mayor Fulop and the Municipal Council have approved the hiring of outside auditors to review all historical Payment in Lieu of Taxes (PILOT) agreements.  The audit will ensure the city is receiving the maximum amount of revenue according to each individual PILOT agreement, and any additional dollars found will be transferred to the Board of Education.

Mayor Fulop’s Administration has not granted any tax abatements for more than 3 years, and the School Funding Action Plan also includes an abatement sharing revenue that restructures the municipal budget to share abatement revenue in its entirety over 3 years.  The tax abatement sharing alone retrieves $40 million for the schools.

“This is a serious issue and we are taking steps to fix it, and I’m encouraged that we’ve come up with a plan of action that doesn’t require massive tax increases for people on fixed incomes or broad layoffs.  Instead, we’ve laid the groundwork to fix the system responsibly, and most importantly, in a fashion that best serves our children,” concluded Mayor Fulop.

In 2019, the city took steps to implement a payroll tax, and earlier this year Mayor Fulop put forward an action plan to save the A. Harry Moore School in its entirety.

“We are doing our part on the city side, and we set a framework that the Board of Education can work towards which helps solve the problems. The next steps need to come from the elected Board of Education to execute on their side,” Mayor Fulop concluded.