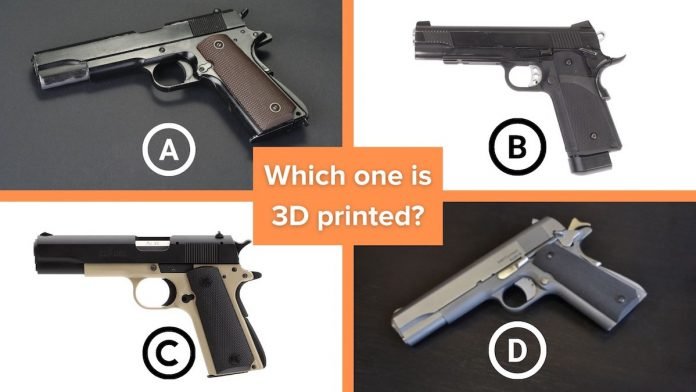 One of these weapons was 3D printed. Can you tell which one?
Neither can law enforcement. That’s why my colleagues Senator Edward J. Markey, Congressman Ted Deutch, & I are introducing the 3D Printed Gun Safety Act to prohibit the online distribution of 3D printing blueprints & instructions for guns.
Senator Menendez’s office issued the following press release on the proposed legislation:

Because 3D printing allows individuals to make firearms out of plastic, these guns may be able to evade detection by metal detectors at security checkpoints, increasing the risk that a firearm will be used to perpetrate violence on an airplane or in another area where people congregate. The increasing availability of 3D printers means unlicensed individuals, including violent felons, domestic abusers, and other dangerous individuals, could obtain a firearm by manufacturing it themselves. These firearms are also untraceable since they do not have a serial number for law enforcement to reference. If the instructions for 3D printing firearms and firearm parts are available online, people intending to commit acts of gun violence may create untraceable firearms in order to avoid accountability for these crimes. The 3D Printed Gun Safety Act will make it illegal to distribute online digital files that can automatically program a 3D printer to produce or complete the manufacture of a firearm.

“With the click of a mouse, anyone with an internet connection and a 3D printer essentially has a license to print, shoot and kill,” said Sen. Menendez. “Undetectable and untraceable 3D printed guns allow criminals to circumvent law enforcement and commit crimes. That’s why we must close the ‘3D Gun Loophole’ that allows dangerous individuals to exploit gaps in existing law to manufacture firearms at home they cannot otherwise legally obtain.

“With no background check required, untraceable and undetectable 3D printed guns serve as the ultimate gun-acquisition loophole,” said Sen. Markey. “With the click of a mouse, anyone can download a computer file and use a 3D printer to manufacture a semi-automatic weapon. We cannot allow the online availability of downloadable firearms to add fuel to the fire that already is a massive gun violence public safety crisis. I thank Senator Menendez and Congressman Deutch for their tremendous partnership on this legislation that will help close a major safety loophole.”

Congressman Ted Deutch (D-Fla.-22) is leading the House version of this bicameral piece of legislation.  “3D printers are increasingly used to manufacture everyday goods easily and cheaply; but, we cannot allow individuals to make deadly firearms with the same ease,” said Congressman Deutch. “These printers are capable of making high-strength plastic firearms that are untraceable and undetectable – something criminals and other individuals prohibited by law from possessing a firearm could use to evade our laws. Congress must take care to ensure that internet access does not equal gun access.”

Sen. Menendez has long been an advocate for implementing commonsense gun safety legislation that will help reduce the scourge of gun violence in America. Earlier this month, he joined colleagues in introducing a bill that would keep hate crime offenders from being able to get their hands on a gun. Last month, he introduced legislation that would ban untraceable, undetectable guns that have become increasingly popular among white supremacy groups. Sen. Menendez has also reintroduced bills, cosponsored by Sen. Booker, to outlaw gun silencers, which make it harder to detect gunfire, and the Keep Americans Safe Act to ban high-capacity magazines. And in March, Sen. Menendez introduced legislation to put an end to the so-called “Tiahrt Amendments,” which currently prevent the preservation and disclosure of gun records.

Sen. Menendez has also supported previous efforts to ban assault weapons and pass universal background checks, and voted for the original Assault Weapons Ban in 1994 as a member of the House of Representatives.

A copy of the legislation can be found HERE.