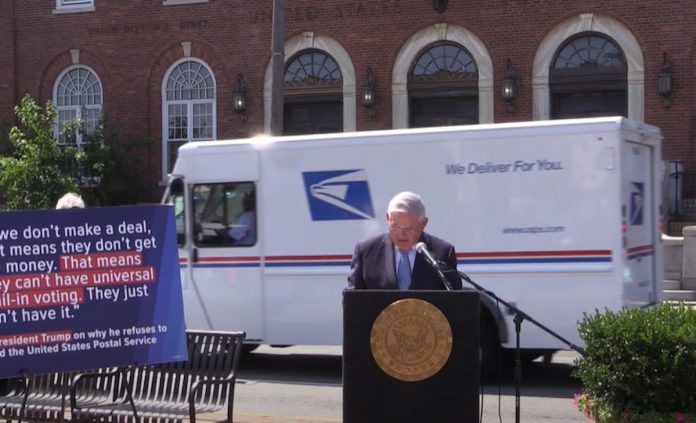 “The President of the United States is on record saying he will not fund the post office because he believes it’s in his personal, political interest to disrupt and discredit the election process and disenfranchise millions of voters,” said Sen. Menendez.  “If the administration continues down this path of defunding the postal service, our democracy and economy will suffer.  Families, small businesses and thousands of frontline postal workers will be put in harm’s way.  And it’s not an exaggeration to say that innocent people will get hurt.”

Sen. Menendez has helped lead efforts to include increased USPS funding in the next COVID-19 stimulus package to help the post office handle increased shipping demands and expansion of mail-in voting due to the pandemic, but President Trump told Fox News last week that he would block those efforts, specifically to prevent mail-in voting.  “If we don’t make a deal, that means they don’t get the money.  That means they can’t have universal mail-in voting; they just can’t have it,” he said.

As New Jersey takes steps to expand Vote-By-Mail for the November election, the USPS recently warned 46 states, including New Jersey that it would not be able to deliver all mail-in ballots in time to be counted.

“This is a dangerous attack on our nation and our democracy,” Sen. Menendez continued.  “But instead of giving the Post Office the support it needs, this president—with the help of his political crony, Postmaster General DeJoy—is doing everything he can to undermine, delay and outright stop the mail.”

The president of the New Jersey State Association of Letter Carriers, Richard O’Connell, Jr., and several postal workers stood today with Sen. Menendez and described how the USPS slowdown is impacting their work and New Jersey residents.

“As they risk their health each day along with other frontline essential workers, letter carriers have become angry, frustrated and embarrassed by various USPS management initiatives that are now resulting in delayed mail and undelivered routes in many areas of the country,” said New Jersey State Association of Letter Carriers President Richard O’Connell, Jr.  “The Postal Service must provide reliable service to postal customers, particularly during the pandemic when our role is more essential than ever.”

Postmaster General DeJoy confirmed to Congress that he directed a reorganization of USPS leadership, functions, and operational changes in post offices and processing centers that include cuts in overtime, mail transportation trips, and equipment at mail processing plants.  The USPS is also reportedly removing collection boxes in many communities without warning, while at the same time inexplicably considering post office closures.

“The Postal Service is an essential public institution with an obligation to serve every community in the nation.  As Postmaster General, you should not make changes that will slow down mail or compromise service for veterans, small businesses, rural communities, seniors, and millions of Americans who rely on the mail for medicines, essential goods, voting, correspondence, and for their livelihoods,” wrote Sens. Menendez and Cory Booker and other fellow Senate Democrats in a letter demanding answers from DeJoy.

All 47 Senate Democrats, including Sens. Menendez and Booker, sent a letter to Postmaster General DeJoy last week, calling on him to address the mail delays, halt planned Vote-By-Mail price hikes and explain his actions that have led to nationwide mail disruptions.

In addition to increased funding for the post office, Sen. Menendez has insisted that any COVID stimulus package include: an extension of the $600 a week in expanded unemployment benefits; robust, flexible funding for state and local governments; new and extended housing protections to prevent an onslaught in evictions and foreclosures; and increased funding for food assistance programs, aid to hospitals, and to expand COVID-19 testing and vaccine development and distribution.

Full text of the letter being sent today is below and can be downloaded here:

We write to seek answers about changes to the U.S. Postal Service under your leadership that are adversely affecting mail delivery for Americans across the country.  We call on you to testify before Congress about these changes and their impact on every person in our nation.

The Postal Service is an essential public institution with an obligation to serve every community in the nation.  As Postmaster General, you should not make changes that will slow down mail or compromise service for veterans, small businesses, rural communities, seniors, and millions of Americans who rely on the mail for medicines, essential goods, voting, correspondence, and for their livelihoods.

Last week, however, you confirmed to Congress that you recently directed operational changes in post offices and processing centers.[1]  On August 7, 2020, you also announced a significant reorganization of Postal Service leadership and functions.[2]  These changes include the elimination of extra mail transportation trips, the reduction of overtime, the start of a pilot program for mail sorting and delivery policies at hundreds of post offices, and the reduction of equipment at mail processing plants.

The Postal Service has characterized these changes as efficiency or cost-saving measures and minimized any “temporary service issues” as an “inevitable” side effect of implementing new procedures.[3]  However, in practice and in the midst of a pandemic, these actions, whether intentionally or not, are causing mail delays and appear to constitute an unacceptable threat to the Postal Service and the millions of Americans who depend on it.

In the weeks since you began to implement these changes, we have seen a steep increase in constituent concerns about mail delays, including restricted mail movement, limitations on carriers’ abilities to timely deliver mail, and most concerning, risks to receipt of critical mail involving life-saving medication and ballots for the upcoming general election.  There are also reports that post offices have significantly reduced their hours, including in West Virginia, where postal officials circulated an alarming document announcing potential post office closures before quickly withdrawing it and calling it a misunderstanding.

As Postmaster General, you have avoided answering questions about the magnitude of delays we have seen and have not yet provided any evidence that you studied or considered how your changes would affect delays and mail service before implementing these changes.  Furthermore, you have refused to engage with nearly all Members of Congress who have reached out to you or raised concerns about these issues.  Inevitably, without additional information or engagement from you or the Postal Service with stakeholders about these changes, your actions raise questions regarding your intent and whether you have adequately sought to fully understand the Postal Service’s current capabilities, personnel, and public service mission before implementing these changes.

The Postal Service is a public institution that both serves and belongs to every person in our nation.[4]  As a result, we call on you to testify before Congress about all changes you have made and plan to make as Postmaster General.  The lack of transparency so far regarding the intent, scope, and responsibility for changes at the Postal Service is unacceptable.  We understand you have committed to being more forthcoming and transparent with Congress and the American people regarding these changes, including providing documentation of the operational changes you have made and will be making since beginning your term.  For every American who relies on the Postal Service, we call on you to fulfill that commitment without delay.

To that end, please provide the following information by August 24, 2020:

1.     Please explain how the changes you have made to Postal Service operations since becoming Postmaster General have affected on-time mail delivery (i.e. service performance).  Please provide all nationwide, Area, and regional service performance data since June 15, 2020.

2.     Did you conduct any formal analysis before making these changes to Postal Service operations, including analysis of the potential effect on service performance?  If so, please provide the analysis.  If not, explain why not.

3.     It appears the Postal Service did not consult meaningfully with any stakeholders, including unions, mailing industry stakeholders, or others, before implementing these operational changes.  Please explain why.

4.     What analysis did you conduct over your 8 weeks as Postmaster General to determine an “organizational realignment” was necessary and that the previous structure was inadequate?  Please provide copies and descriptions of any analysis, including any discussions with employees and business stakeholders.

5.     What, if any, plans are under consideration for further post office or facility hour reductions, suspensions, closures, or consolidations?

6.     What steps will you be taking to suspend or halt any changes adversely affecting mail delivery during this pandemic and in advance of the general election?

Thank you for your attention to this important matter.