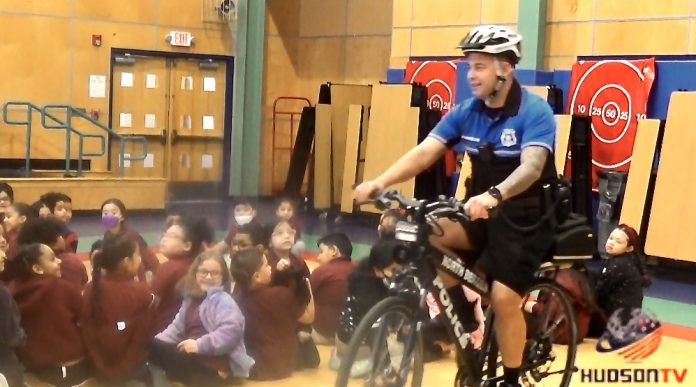 Officers and detectives from the North Bergen Police Department held a meet and greet with students from the Lincoln School to teach them about pedestrian and bike safety.

“You have to be safe once you’re riding a bike and once you’re crossing the street,” six-year-old, Ghazal Awada says you always have to look side-by-side because there might be some people who don’t know there are little kids there.

“It’s very important with the safety of the pedestrians and the bicyclists, there’s too any accidents out there to begin with,” says Det. Frank Mena.

With accidents at an all-time high, there’s no better time than now to raise awareness with the students.

“Police were telling us to always watch out when you’re riding a bicycle and to make sure you have safety things on like a helmet, knee pads, shoulder pads,” says Izabella Acosta, a second-grader.

“It’s always a good idea to have reflectors at night — whether you’re on a bicycle or (have on) a backpack to let the other motorists know, ‘hey, we’re out here,’” Mena says.

They are supposed to stop and bicyclists and pedestrians also have to pay attention to traffic lights.

“We have to show them if we’re here or not,” says Awada. “If it’s red we’re allowed to cross, but if it’s green we’re not ‘cause then they’ll run over us.”

Principal Nick Sacco tells his son all the time to look both ways when he crosses the street.

“Sometimes hearing it from somebody else, especially a police officer — makes all the difference in the world,” Sacco says.

There’s a very real danger out there facing bicyclists and pedestrians.

“That would make you get hurt a lot, and you might die and that’s not good,” says Awada.

“Yes, and try to ride my bicycle without the extra wheel ‘cause I fall a lot,” eight-year-old, Acosta says. “But that’s the good part; when you fall, when you make mistakes you always learn from your mistakes.”

Ghazal has a bike that she is safe on but feels like she could be even safer, starting with wearing a helmet — after hearing the police presentation.

“Wear the safety things and the thing that you have to wear around your legs and at your elbows,” says the first-grader.

The students were enthusiastic and interested. They responded to questions posed by the police. So Mena says they are aware of what’s going on out there.

“Being alert out there and keeping an eye out on your surroundings,” says the detective.

This is the first assembly these first and second-graders have attended since COVID and it was a great learning experience for all the students.

“Anything that they learned, they take one thing out of it; it was well worth it,” the principal says.