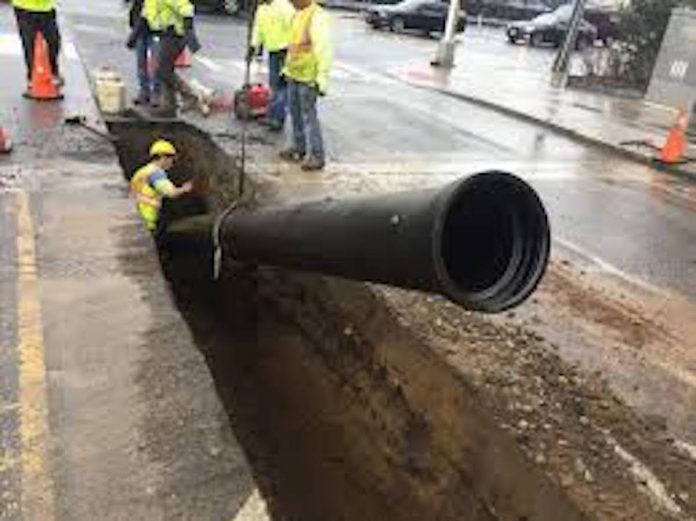 The City of Hoboken yesterday installed the final water main service line to complete the installation of 15 blocks of brand new water mains. As a part of the water infrastructure project, the City proactively replaced nearly 7,000 linear feet of Hoboken’s oldest water mains over the past year. The upgrades included the installation of new service lines, road repaving, Vision Zero roadway improvements, as well as infrastructure to help mitigate localized flooding. The replacement of water mains utilized low interest and interest free loans from the New Jersey Infrastructure Bank, with no funding from the 2020 municipal budget. In 2019, the City entered into a contract with SUEZ that now provides for $33 million in water main upgrades through 2034, with an average of $2.2 million invested every year.

“The installation of nearly 7,000 linear feet of new water mains is a major step forward for Hoboken’s underground infrastructure, after decades of neglect,” said Mayor Ravi S. Bhalla. “Not only did we replace some of Hoboken’s most vulnerable water mains over the past year, we also made included Vision Zero and flood infrastructure improvements as a part of the project. These are major quality of life upgrades for our residents that we are committed to building on in the months and years to come.”

“SUEZ is proud to be a part of this major milestone, as it signifies progress in the journey set forth to modernize the system,” said Xavier Castro, President of Environmental Services for SUEZ North America. “We are in this together, and will continue to collaborate and transform Hoboken into one of the most environmentally advanced cities for generations to come.”

As of today, nearly 7,000 linear feet of brand new water mains were installed on the following streets:

All 15 blocks with new water mains have been repaved or will be repaved in the coming weeks. The repaving of 15 blocks will also incorporate safety improvements to help the City achieve its Vision Zero goal to eliminate traffic-related deaths and injuries by 2030, including new high visibility crosswalks, painted curb extensions, “daylighted” corners to improve visibility at intersections, 6,800 linear feet of bike lanes, and 37 ADA-compliant curb ramps.

Four green/gray stormwater detention tanks were installed at various points along the project, to store rainwater during storms and help mitigate localized flooding. Combined, the four stormwater detention tanks will have the capacity withhold nearly 7,000 gallons of rainwater. One rain garden curb extension was also constructed at Garden Street and 4th Street, which has the capacity to store approximately 1,500 gallons of rainwater. The rain garden curb extension also serves as a pedestrian safety measure to shorten the crossing distance for pedestrians.