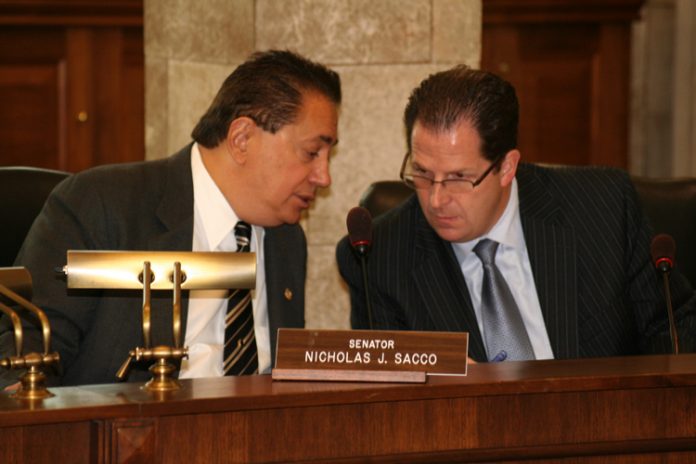 The changes to the legislative map have resulted in two, long-term, Democratic Senators, Nicholas Sacco of the 32nd and Brian Stack of the 33rd, being placed in the same legislative district.  Obviously, something has to give.  Someone has to go.

Hudson County Democratic Organization Chairwoman, Amy DeGise, a Jersey City Councilperson, and her father, Democratic Hudson County Executive, Tom DeGise, each made pleas for the vote to be delayed.  The County Executive stated, “As an elected leader representing the most diverse county in the state, I am demanding that the members of the Apportionment Commission delay their planned vote until next week in order to allow the residents of Hudson County to be properly heard regarding this potentially seismic, disruptive change to our legislative representation. This matter is far too important for the future of Hudson County and the entire state to be rushed through in a closed process without public input. I implore the members of the commission to delay their vote, and I also call on other elected officials from Hudson County and throughout the state to join me and add their voices to the goal of making sure that this vote does not proceed today. We must reach a compromise that protects the interests of Hudson County residents along with the rest of the state, but that can only happen if a sufficient amount of time is given to allow the process to continue. Moving forward with a vote at this time would be absolutely unacceptable.”

Chairwoman DeGise added, “The new legislative map being discussed by the apportionment commission would greatly damage the political and governmental structure of Hudson County, potentially pitting two of our most experienced and effective legislators against each other when there are clearly other valid options available to the commission. There is no reason why this decision should be rushed out today without giving residents a chance to make their voices heard, especially when there is still time left in the process and the elections for these seats will not be held for more than a year, because this outcome would hurt our ability to pursue progressive policy growth by combining two of our strongest districts. We understand that population growth makes some degree of change inevitable, but there is no reasonable justification for throwing two incumbent Democratic Senators who both have tremendous records of representing their constituents in the same district.”

The pleas fell on deaf ears.  After the 9-2 vote to approve the new legislative map, Commission Co-Chairs Al Barlas and LeRoy J. Jones released the following statement: “We are pleased to announce that the New Jersey Legislative Apportionment Commission has reached a consensus with the guidance of Independent Member Judge Philip Carchman on a map that will provide fair and responsive legislative districts for all New Jersey residents for the coming decade.

This historic agreement comes after the Commission already made history with the number of public hearings held, the publication of maps for comment, and the amount of substantive public input received. We believe the new map is responsive to the communities of interest testimony received by the Commission, while still adhering to Judge Carchman’s revised standards for map drawing.

We want to thank our Commissioners for their hard work throughout this process, our Executive Directors Brian Alpert and Saily Avelenda, and counsels Raj Parikh and Jason Torchinsky, Raysa Martinez-Kruger and the Office of Legislative Service, and the other professionals that helped guide the Commission.”

So what does this all mean?  North Hudson has gone from two State Senators to one, with Jersey City now having two rather than one.  Additionally, several western Hudson municipalities have moved out of Hudson County’s legislative jurisdiction into Essex County’s.

In order to understand this a little easier, here is a breakdown:

Needless to say, most of Hudson County, which is heavily Democratic, does not like the newly drawn up legislative map.  While nothing changes until next year’s election, speculation is already running wild, particularly in North Hudson.  Brian Stack and Nicholas Sacco cannot both remain in the State Senate under these new boundary lines.  Who goes? Who stays?

Stay tuned.  This will be very interesting to say the least.