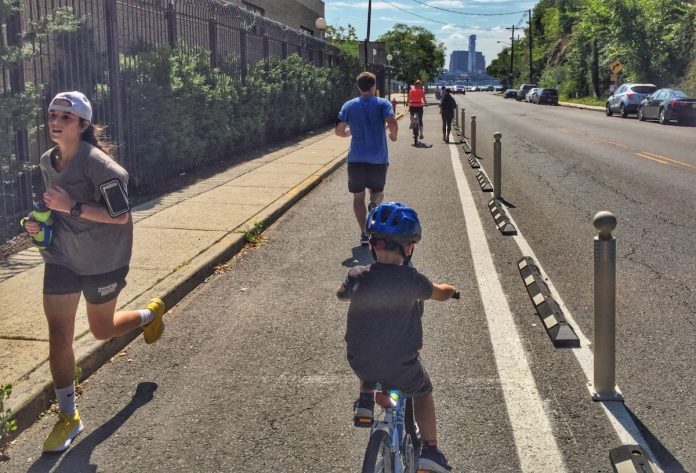 Mayor Ravi S. Bhalla announced today that the City of Hoboken was awarded with a $325,000 grant from the New Jersey Department of Transportation to construct Protected Bike Lanes (PBL) on Sinatra Drive between 4th and 11th Streets. The PBL will connect the South Waterfront Bikeway between Newark Street and 4th Street to the two-way bikeway on Sinatra Drive North along Hoboken’s north waterfront. The City will begin design of the PBL later this year, with construction expected next year after Stevens Institute of Technology is completed with construction currently taking place on Sinatra Drive.

“Hoboken continues to lead the way with initiatives that prioritize pedestrian safety and green modes of transportation,” said Mayor Bhalla. “This PBL is an important Vision Zero upgrade that will further improve our highly-used public spaces with a safe connection to our North and South waterfronts. I thank Governor Murphy and his team for the grant funding that will make the Sinatra Drive PBL a reality.”

“We are pleased to see this upgrade to Sinatra Drive which is used daily by many people, on foot and on bicycle,” said Chris Adair, President of Bike Hoboken. “This protected bike lane will connect and create a much needed safe lane along the Hoboken waterfront, and provide more space for all road users.”

Sinatra Drive currently has a protected multi-use pathway between 11th Street and the skate park that was established in 2016. Last year, Hoboken and the South Waterfront Corporation constructed upgrades to the walkway and bike paths on the South waterfront between Sinatra Drive and Newark Street, and along Pier A. The improvements restored the walkway surface, and a second phase will implement pedestrian safety improvements and upgrade the South Waterfront Bikeway.