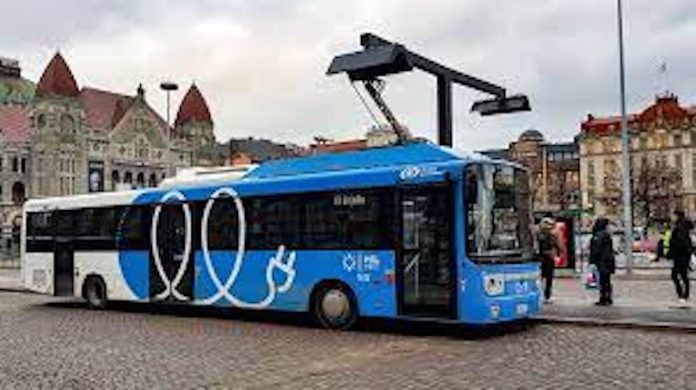 NEWARK, NJ – NJ TRANSIT continues to aggressively advance its zero-emissions bus program with the release of its roadmap to a 100% zero-emission bus fleet, at today’s Board of Directors Energy & Sustainability committee meeting.  The roadmap is highlighted by several key efforts in recent weeks including the release of a Request for Proposals (RFP) from qualified consulting firms for the Bus Garage Modernization Program and the application submitted for federal funding to acquire additional battery electric buses to be used in the Newark region. NJ TRANSIT also remains on track for the launch of the deployment of eight electric buses in Camden by the end of this year.

“The roadmap to achieving a 100% zero-emissions bus fleet by 2040 is establishing the foundation that will ultimately create NJ TRANSIT’s environmentally friendly fleet of the future,” said NJ TRANSIT Board Vice-Chair Cedrick T. Fulton. “Advancing the modernization of NJ TRANSIT’s bus garages and applying for additional federal funding for electric buses are critical steps to meeting this very ambitious and important goal.”

“NJ TRANSIT remains wholly committed to transitioning to a 100% zero-emissions bus fleet by 2040, aligned with Governor Murphy’s Energy Master Plan,” said NJ TRANSIT President & CEO Kevin S. Corbett. “While we have laid out aggressive plans to achieve this milestone, we are moving forward deliberatively by leveraging relationships with our peer agencies, both nationally and internationally, to learn from their experiences and ensure our success.”

“NJ TRANSIT is a major component of New Jersey’s infrastructure and the electrification of their bus fleet is an important step in achieving environmental justice and equity,” said Jane Cohen, Director, Office of Climate Action and the Green Economy. “NJ TRANSIT working aggressively to implement these initiatives is a key step towards reaching Governor Murphy’s clean energy and environmental justice goals.”

In September 2020, NJ TRANSIT’s Board of Directors awarded a $3.235 million contract to Scalfo Electric of Vineland to renovate the Newton Avenue Bus Garage with electric vehicle charging stations and other associated infrastructure modifications. That project is targeted to be completed in Fall 2021 and will support the Camden electric bus deployment.

In February 2021, NJ TRANSIT released of a Request for Proposals (RFP) for the purchase of eight battery-powered electric buses, to be introduced as part of an early deployment in the City of Camden. The Camden limited deployment will enable NJ TRANSIT to study the unique benefits and challenges of using zero-emissions vehicles in a real-world setting.

The Camden demonstration project is a first of its kind initiative for NJ TRANSIT, which will test electric buses in real world conditions on specific NJ TRANSIT routes. This will provide invaluable data and information on the effects of weather, passenger volume, road conditions and other factors on electric bus performance, including travel distance available between recharging. The pilot project will also review the infrastructure resources and work required to modernize NJ TRANSIT’s bus garages to accept new charging stations, and the significantly greater power feeds needed to energize them. The pilot also will help NJ TRANSIT understand how to accomplish the fleet and garage infrastructure upgrades without disrupting the regular daily service our customers rely on.

The Hilton Garage in Maplewood is next on NJ TRANSIT’s list for modernization to accommodate battery electric buses to serve the Newark region.  The selected consultant will create construction documents for utility power service needs and facility upgrades for an early construction to accommodate up to sixteen (16) battery electric buses at Hilton garage. The consultant will also perform site surveys for all 16 existing garages in NJ TRANSIT’s network (inclusive of the Hilton Bus Garage) to document items such as power/utility connections, architecture and mechanical, electrical and plumbing systems.

NJ TRANSIT is requesting proposals from qualified consulting firms to conduct Conceptual Design, Preliminary and Final as well as Engineering and Construction Assistance services for the Bus Garage Modernization Program.  The proposed upgrades involve the transitioning of the garage infrastructure to support battery electric buses and other zero-emissions technologies.

The Program will be completed in three major stages.

The submission deadline for the RFP is July 13 with a selection to be made later this summer.

NJ TRANSIT has applied for a federal grant to purchase eight articulated electric buses that would be based out of Hilton Garage and would serve a route in Newark and Irvington.

On April 12, NJ TRANSIT applied for a grant from the Federal Transportation Administration’s Low or No Emissions Grant Program. The FTA will award a total of $180 million in grants nationwide under the program. Should NJ TRANSIT be awarded the federal grant, the State of New Jersey, through the Transportation Trust Fund, would contribute an additional $4.5 million, for a total grant award of approximately $15 million.

The articulated electric buses would replace eight 40-foot diesel vehicles operating on the No. 25 line, which runs through Newark and Irvington. As noted on the application for the funds, the affected communities are considered environmentally overburdened and the new buses would enable NJ TRANSIT to increase service with the larger buses without negatively affecting air quality.

This year’s grant money would build on an initiative already underway to add zero-emission vehicles on the No. 25 line. In 2020, NJ TRANSIT received more than $7 million from the FTA for the procurement of battery electric buses, which was partly matched by $3 million in state Transportation Trust Fund funds. Additionally, the state Board of Public Utilities has already committed approximately $10 million for supporting infrastructure upgrades such as charging equipment at Hilton Garage.

In a letter of support for last year’s grant application to the FTA, Joseph Fiordaliso, president of the New Jersey Board of Public Utilities, noted that battery electric buses can be up to eight times more efficient to operate than a diesel bus and can provide a critical source of electric power in the event of an emergency.

The transition to zero-emissions vehicles advances NJ TRANSIT’s goal outlined in the 10-year Strategic Plan to “Promote a More Sustainable Future for Our Planet.”