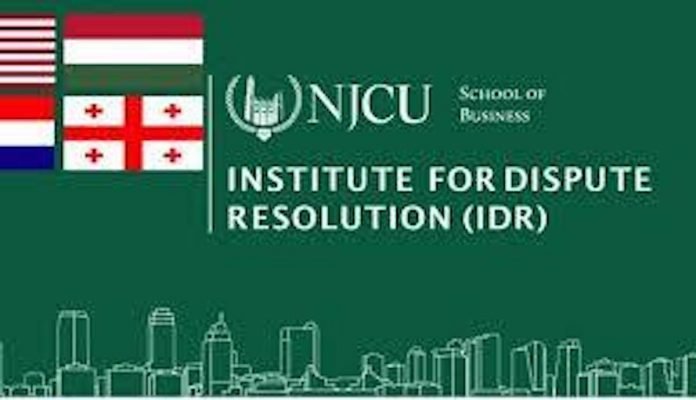 Today, the IDR hosted what might have been its biggest event ever; a live, international, Google event in partnership with International Mediation Institute entitled, “Building the Future of Global Business: Enhancing Growth and Investment Through Mediation.”  The four participating countries were the United States, Hungary, the Republic of Georgia and the Republic of Croatia.

Other sponsoring co-hosts were Eotvos Lorand University, the Budapest Conciliation Board, which is affiliated with the Budapest Chamber of Commerce and Industry, the Croatin Mediation, the Georgian Bar Association, EBA Mediation and Arbitration Center, and the Dispute Resolution Section of the New Jersey State Bar Association.

Felicia Farber, the Chairperson of the Steering Committee for the IDR, is a full-time arbitrator, mediator, workplace investigator and attorney licensed in New Jersey, New York and Pennsylvania, stated “Today’s meeting is aimed at promoting global trade through dispute resolution. The goal is to resolve disputes in the fastest means possible.”

The Zoom meeting featured speakers representing each of the four participating countries.  NJCU President, Dr. Sue Henderson, opened the session by saying, “I am deeply committed and believe that work in the future will be global in nature.”  Inevitably, as businesses conduct negotiations with trade partners in other countries, disputes are likely to arise.  The key is to resolve those conflicts in a manner in which business between the partners can continue fairly and successfully moving forward.  The ultimate goal is to avoid litigation.  That’s what IDR aims to accomplish.

Croatian Judge Srdan Simac, PhD., was among the guest panelists for today’s video conference.  Each speaker gave their own unique, global perspective of how mediation can be used to forward the growth and enhancement of business and foreign investment.  Simac, a mediation pioneer in his country, stated, “Mediation is risk-free for business people.  It can lead to a better resolution than litigation for business people worldwide.  Nobody can control litigation results by a court.  You lose control over your lives and business.  Business problems shouldn’t be treated like legal problems.  They should be treated like business problems.”

Another guest panelist, Giorgi Tsertsvadze, an Associate Law Professor at Tbilisi State University and a practicing attorney and member of the Georgian Bar Association, told the group, “We have organized several training sessions (in the Republic of Georgia) for consuls to inform them why dispute mediation is better than going through litigation.  The consuls can relay the information (from the training sessions) to Georgian companies so they can settle disputes.  The Republic of Georgia, which was initially hesitant to accept mediation as an answer to resolving business disputes both internationally and domestically, has come on board and fully supports the practice.

In Hudson County, some of the strategic partners associated with the Institute for Dispute Resolution, include former Assemblyman and current Jersey City Department of Housing, Economic Development & Commerce Director in the Administration of Mayor Steven Fulop, Jose Arango; Jersey City resident and entrepreneur Daniella Sarbu, owner of several downtown businesses, including World of ABC, The Waldo School and Cafe Esme, a French-inspired spot; and Steering Committee member Gregory Dell’Aquila, of the JDA Group, LLC in Hoboken.

To learn more about the work being done by the Institute for Dispute Resolution at New Jersey City University, you can call (201) 200-2556, or log on to njcu.edu.