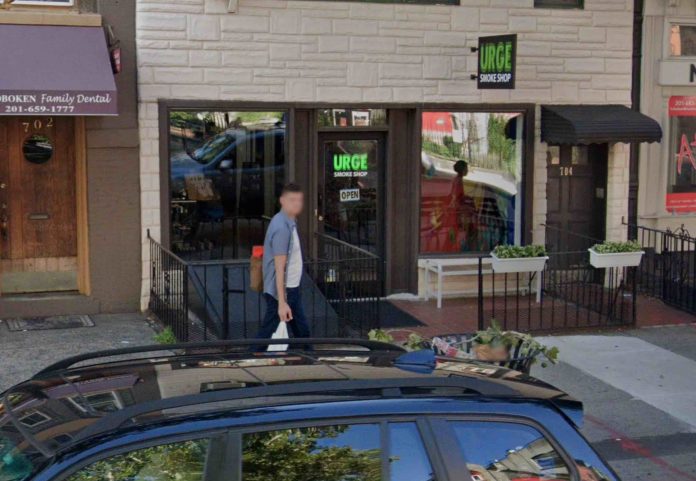 Incident Detail: Shortly before midnight at about 23:48 hours, on August 18, 2018, P.O. Jonathan Figueroa and P.O. James Barbro responded to Urge Smoke Shop 704 Washington Street on a reported shoplifting. As the officers responded, a description of the actor was broadcast over the police radio. Officer Enrico Gnassi located a male matching the above description riding a bicycle eastbound on 7th Street from Washington Street. Officer Gnassi ordered the cyclist to stop several times but he continued to ride away. The cyclist then crossed the intersection of 7th and Hudson Street and fell as he reached the sidewalk. Officer Gnassi was able to detain him for investigation, which led to his arrest for shoplifting and obstruction. The cyclist was identified as Jasper Brafford 22 y/o Male from North Bergen, NJ. Officer Brandon Fitzgibbons responded as backup and assisted Officer Gnassi in transporting Brafford to police headquarters for processing. Sergeant Joseph Lucignano and Officer Frank Lombardo responded to Urge Smoke Shop and met up with Officer Figueroa and Officer Barbro. An employee from Urge Smoke Shop witnessed Brafford grab two bongs from the shelf and immediately ran out of the store. As the employee attempted to stop Brafford, he witnessed Brafford trip and fall and in the process dropped the bongs on the ground, causing them to shatter. Brafford then got up, mounted a bicycle, and rode away going east on 7th Street, where Officer Gnassi apprehended him. As the employee tried to stop Brafford, he witnessed a second male stuff several packs of tobacco papers into his pocket. The employee was able to stop this male without incident and retrieved the packs of tobacco paper. When officers arrived, the second male was still on scene. He was identified as Daniel Recinos 22 y/ o Male from Union City, NJ. Recinos was placed under arrest by Officer Barbro and Officer Figueroa. Recinos was searched after being placed under arrest and he was found to be in Possession of Control Dangerous Substance Marijuana and Drug Paraphernalia. Recinos was transported to headquarters and processed. Recinos was charged with Shoplifting, Possession of Control Dangerous Substance, and Drug Paraphernalia. Recinos’s charges were placed on a summons and he was released with a court date. While processing Brafford, he asked to use the bathroom. Brafford was taken to the bathroom by Officer Marvin DeJesus, Officer Brandon Fitzgibbons, and Sergeant William Collins. While walking back to the processing room, Brafford tensed up, started to resist officers’ control and became uncooperative.  Bradford’s aggressive behavior caused Sergeant William Collins to fall to the ground and additional officers were needed to regain control of Brafford. Lieutenant Michael Costello and Officer Michael Aviles arrived to assist. Sergeant Collins was not injured as a result from him falling and Officer Fitzgibbons reported pain to his left thumb. Officer Fitzgibbons was treated by an ambulance and sought no further treatment. Officer Fitzgibbons returned to full duty with no restriction. Brafford was charged with Shoplifting, Obstruction, and Aggravated Assault on a Law Enforcement Officer. Brafford’s charges were placed on a warrant and he was transported to the Hudson County Correctional Facility.