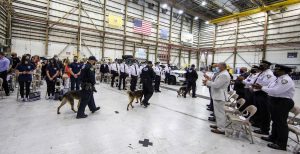 “Today and every day, we strive to honor the sacrifices of our fallen 9/11 colleagues through our work and dedication to keeping the region safe,” said Port Authority Chairman Kevin O’Toole. “This solemn tribute to name our newest K-9’s after our fallen officers is a reminder that their lives and their sacrifice will never be forgotten.” 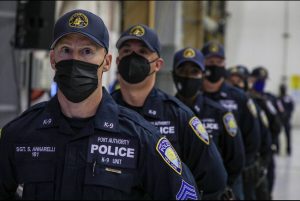 “These new teams of canines and their handlers who received extensive training certification in explosives detection will help ensure the continued safety of our region as they patrol our airports, bridges, tunnels and other facilities,” said Port Authority Executive Director Rick Cotton. “While we can never repay the debt owed to any of our fallen officers, today’s ceremony helps us to ensure that their legacy lives on.”

“The Port Authority Police Department is proud to welcome these six new teams of handlers and canines who will join our highly skilled K-9 unit,” said PAPD Superintendent Edward Cetnar. “We are especially thankful to the families of these fallen officers who allowed us the opportunity to name our newest K-9 class in their honor.” 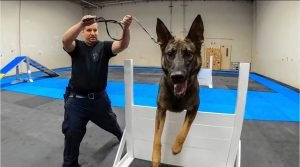 The Port Authority’s K-9 unit was created in 1984. The agency began training detection canines in 1993, after the 1993 World Trade Center bombing. Since the start of the local training program, 125 teams have joined this specialized unit. The highly trained Explosive Detection Canine Teams function as a deterrent to terrorism directed towards transportation systems and work collaboratively with federal, state and local partners. One of the most well-known members of the K-9 team was K-9 Sirius, who was killed during the September 11, 2001 attack at the World Trade Center. K-9 Sirius was the only K-9 killed in action on 9/11. 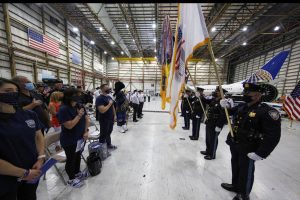 Named in honor of Chief James Romito killed on September 11, 2001

Named in honor of Captain Kathy Mazza killed on September 11, 2001

Named in honor of P.O. Donald McIntyre killed on September 11, 2001