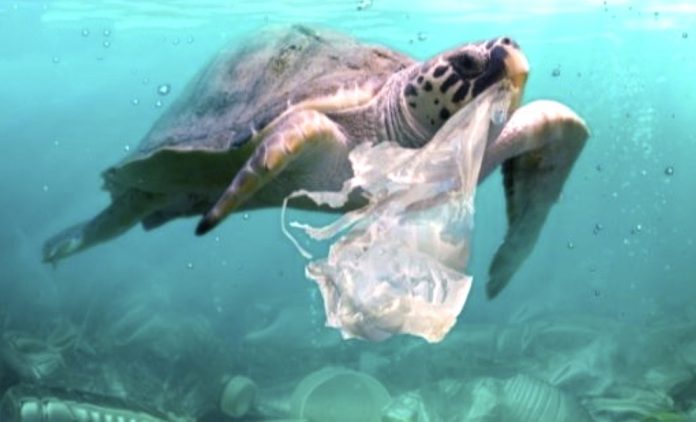 “Why we’re banning the plastic bags, it actually clogs up our water pipes, contaminating our water,” says Mariana Batres, Environmental Club co-president. “That’s why our ocean reefs are dying, our coral reefs are dying.”

It’s all about reusable bags… check Amazon, Target or your favorite retailer for the best prices because come May 4 you will have to bring your own or purchase those available at various supermarkets.

“We came up with this idea of ‘let’s promote this’ before the actual ban comes out,” MUA recycling aide, Tom Stampe says. “So we had the bags printed up through New Jersey Clean Communities, which we had a grant from the state.”

Originally the students thought that people in the community might be against ditching the plastic bags.

“It was actually the opposite. Me and my friends were waiting there, giving bags out and people were actually super supportive about this,” says Daniela Altamirano, Environmental Club co-president. “And that’s something exciting to see.”

New Jersey is leading the way and it means a lot to Mariana.

“Very important to me,” says the aspiring marine biologist. “Because once everything is done, harmed — we see our world going piece by piece. Mother Nature’s actually asking us for help.”

An estimated 300 million plastic bags every year end up in the Atlantic Ocean alone. There are major consequences to all that plastic in our oceans.

“Sea animals, even though people are like, ‘yeah, we see them, we rescue them’ it isn’t enough,” Batres says we should act in the moment.

Taking small steps can make a difference. Daniela says her parents have their own little reusable bags.

“Start just within your family, and then eventually your friends and then you can start moving towards a community,” says Altamirano. “Start from the people you know and that’s a good way to get involved.”

The kids gave out more than 500 bags at Food Bazaar.

“People were so receptive, the kids were amazing… they were giving informational sheets out, educating the citizens of North Bergen,” Stampe says.

According to Altamirano, people stopped at the table and they were using the bags, right at checkout.

“Only two maybe people who were just a little against it, but that’s nothing out of ordinary,” she says.

The time to act is now, because once these animals are extinct…

“That’s when people are like, ‘omg yeah, we should do something,’” says Batres.

By then, they’d be no turning back — the damage would be done.

“I hope we do see more changes like these; this is a huge step — something we haven’t seen before,” Altamirano says.

With Governor Murphy putting forth this legislation, he is setting an environmental precedent across America.

“It’s about time, being that now it’s going to be implemented in the state more in depth,” Altamirano says.

When it’s in full effect, this may be the nation’s strictest plastic bag ban.

It’s impressive how committed the kids are to this cause.

“And Ms. (Dana) Hojnowski and Ms. (Jennifer) Checchio and the Environmental Club that always jump to the occasion,” says Stampe.

Any apathy will only be harmful in the long-run.

“If you find a plastic bag on the street, pick it up because that goes into our water — that we drink,” Batres says once we get into that stage where ‘actually, I should have cared’ it’s gonna be too late.

“Cause you can’t get all that back.”