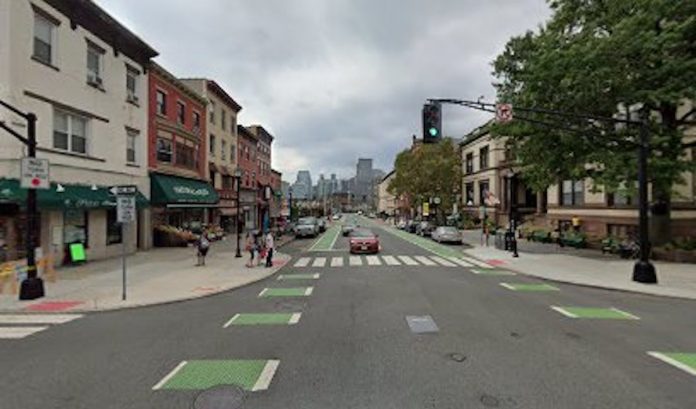 The victim was picking up a delivery in the area of 1st and Washington Streets by City Hall in Hoboken.  He left his vehicle running and unattended.  When he returned, Cabrera says the vehicle was gone.   What a shock.

Police Officers Damien Bates, Tyrone Huggins and James Barbro responded to the victim,  who provided a description of the stolen vehicle.  Moments later, Police Officer Francis McCourt located the vehicle traveling westbound in the area of Newark and Harrison Street. Officer McCourt pulled behind the vehicle, followed the vehicle onto Jersey Avenue into Jersey City and activated his lights and sirens.  The vehicle stopped in the area of 17th and Jersey Avenue and the two occupants exited through the passenger side door.

Officer McCourt stayed with the vehicle.  That’s when he observed the vehicle rolling away. The officer acted quickly, placing the vehicle into park.  Nine additional police personnel responded to assist with the investigation and search for the two suspects.  Hoboken Police were also assisted by Jersey City Police, Port Authority Police, and the Union City K9 unit.

As the investigation continued, two suspects were located by Jersey City Police. Officer McCourt responded and positively identified the two suspects, who were identified as Palms and the 17-year old, male Juvenile.  They were both charged with theft of a motor vehicle and eluding police.  Palms was remanded to the Hudson County Correctional Facility in Kearny and the juvenile was remanded to a juvenile detention center. The operator of the vehicle was issued a motor vehicle summons for leaving the vehicle running and unattended.

The moral of this scenario?  If you leave your car for whatever reason, lock it!!!  Even being the victim turned out to be a lesson learned.

The defendants are innocent until proven guilty in a court of law.

Hope there will be great improvements.