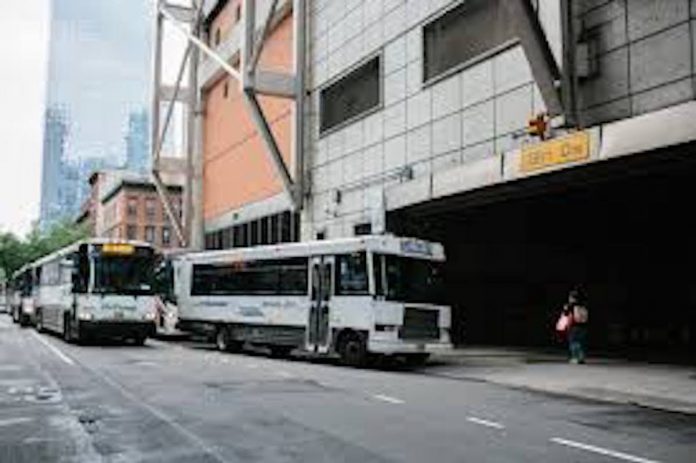 Alternatives Narrowed from Three to One

The Port Authority of New York and New Jersey today unveiled a new plan for the proposed Midtown Bus Terminal project which will completely reimagine the world’s busiest bus terminal and its connection to the Lincoln Tunnel. The new plan laid out in the Port Authority’s final scoping document released today provides for a nearly 40 percent increase in transit rider capacity while responding to the needs of the local community. The new terminal will be designed to serve 100 percent electric bus fleets and will feature cutting-edge technology to manage and speed bus movements in the terminal – using both autonomous vehicle technology and AI-aided traffic management. The release of the Port Authority’s final scoping document describing the new plan based on an extensive public consultation sets the stage for the Federal Transit Administration (FTA) to begin the federal environmental review process consistent with the National Environmental Policy Act (NEPA) and FTA regulations.

“This important step is a turning point in the transformation of the Port Authority Bus Terminal and Manhattan Midtown West into a world-class transportation hub worthy of New York,” said New York Governor Andrew M. Cuomo. “By completely redeveloping the terminal, adding space for commercial development, improving the commuting experience and removing bus traffic and pollution from the surrounding community, we will show New Yorkers and the world that New York is back, and the future is once again bright.”

“From day one, the construction of a new Port Authority Bus Terminal that meets the needs of New Jersey’s commuters and delivers a 21st century, world-class facility has been a top priority for my Administration,” said New Jersey Governor Phil Murphy. “The release of this plan is a concrete step toward our goal to expand bus capacity, ease the stress of our commuters, and provide reliable transportation infrastructure that will carry our regional economy forward. Throughout this process, the Port Authority has been a key partner in advancing this necessary transportation project that will ultimately create more efficient bus service on both sides of the Hudson.”

“Today marks an extraordinary milestone for the Port Authority and a bold step toward realizing the promise made to deliver commuters and travelers the vibrant, 21st century bus terminal in Midtown Manhattan they deserve,” said Port Authority Chairman Kevin O’Toole. “This achievement would not be possible without the hard work and input from dedicated leaders on both sides of the river.”

“This new, creative, and dramatically improved plan for a new Midtown Bus Terminal was extensively redrafted based on input from the local community, from local elected officials, and from the City. The new bus terminal will provide full capacity for future projected growth for commuter bus service, will now provide capacity for intercity buses that currently load and unload on city streets, add capacity for bus staging and storage to reduce congestion in the community, and add much needed green space in Manhattan’s densely populated Midtown West neighborhood,” said Port Authority Executive Director Rick Cotton. “The Port Authority is committed to dramatically transforming one of the region’s most notorious and out of date transit facilities.”

The existing Midtown Bus Terminal was built in 1950 and expanded in 1981. Between 2013 and 2017, the Port Authority sought out proposals to replace the outdated terminal with a modern facility that would meet the needs of commuters, long distance travelers, and the local community. A list of alternatives was assembled using several sources, including the Midtown Bus Master Plan study, the PANYNJ International Design and Deliverability competition, and the Build-in-Place study. In 2019, the Port Authority released a Planning Level Draft Scoping Document which analyzed all prior alternatives and based on specific screening criteria narrowed the agency’s consideration to focus on three options: (1) the Build-in-Place Alternative, which would replace the current terminal at its same location; (2) the Perkins Eastman Design and Deliverability (D&D) Alternative, which would place all operations at the lower levels of the Jacob K. Javits Center Convention Center (Javits Center); and (3) the Regional Plan Association (RPA) Alternative, which would locate commuter operations at a rehabilitated terminal at the present location and intercity bus operations and storage and staging in a portion of the lower level of the Javits Center.

Following a 120-day public comment period which included public hearings in both states and numerous meetings with local elected officials and community board members, the Port Authority eliminated two of the remaining three alternatives laid out in the draft scoping document. In direct response to public comment, the Port Authority added to its analysis the screening criterion of minimizing the distance bus riders need to traverse to access New York City subway connections and reach Times Square office buildings. Minimizing this distance both improves bus riders’ journey and reduces the foot traffic and congestion on neighborhood streets and sidewalks. The Final Scoping Document released today includes this new screening criterion.

The new plan implements dramatic changes and a revised definition of the project to reflect the needs of bus riders and the needs of the neighborhoods immediately surrounding the bus terminal. The new Midtown Bus Terminal plan includes the complete rebuild of the main terminal at its current location with a nearly 40 percent increase in capacity for commuter and intercity buses. Based on community comments, the new plan includes a storage and staging facility that moves commuter buses out of street level storage lots and accommodates intercity buses that previously picked up and dropped off on city streets in the vicinity of the existing terminal. In addition, the new plan responds to the community request for increased public green space.

Finally, the Port Authority expects to use multiple sources to fund the project which, in addition to the $3 billion for the project in the agency’s 2017-2026 Capital Plan, includes provisions to secure additional funding through up to four new high-rise towers. The additional funding from these developments would be derived from: 1) the proceeds from the sale of the development rights for the new towers; and 2) subject to an agreement with the City of New York, funding from Payments In Lieu Of Taxes (PILOTs) which would otherwise be ​paid to the City. The Port Authority also intends to seek financial assistance from existing FTA programs or from a new federal infrastructure program enacted under the new Biden Administration. This multi-source financing model proved successful in the financing of Moynihan Train Hall.

The new plan for the new Midtown Bus Terminal includes:

The construction plan for the new bus terminal will be developed with the construction industry and with the local community. Tentative plans call for a phased construction approach including the staging and bus storage facility to occur first, so that it can serve as a temporary terminal while the existing terminal is being demolished and rebuilt. The decking over of sections of Dyer Avenue would occur early in the phased construction also providing temporary bus staging locations while the main bus terminal is completely rebuilt. Once completed, the decked over areas of Dyer Avenue will become important public green space that reknits the local community.

Reliable and efficient bus service between New York and New Jersey is critical to the interconnected economies of both states, as many New Jersey residents work in New York City. Before the COVID-19 pandemic, the terminal served an estimated 260,000 passenger trips (8,000 bus movements) on weekdays, or 23 percent of trans-Hudson trips entering or exiting Manhattan’s central business district. Based on pre-pandemic ridership trends, demand through 2040 is expected to increase by 30 percent with estimates of up to 337,000 weekday passenger trips.

The final scoping report, released today, includes the details of the Port Authority’s plan that will now be reviewed by the FTA. That report and all future project-related public documents and presentations will be publicly available on a dedicated project website: https://www.panynj.gov/bus-terminals/en/port-authority/planning-level-scoping-process-pabt/resources.html