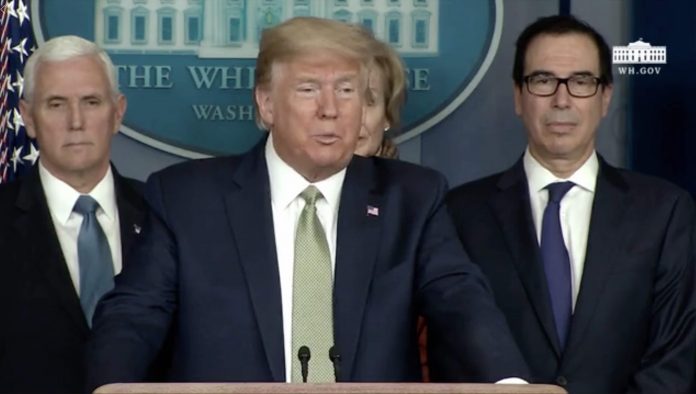 During an hour long press conference earlier today with Vice President Pence and members of the Coronavirus Task Force, President Donald Trump told reporters “we’re going to win the fight” against the coronavirus and America’s economy will be rolling again “pretty quickly.”

The President wants Congress to immediately authorize the sending of checks directly to American households, possibly within two weeks.  Trump stated, “At my direction, (Treasury) Secretary Mnuchin is meeting today with senators on additional stimulus packages.”  The President added that his Administration is looking at loans for small businesses and flexibility for fast food workers.

Mnuchin, who left the press conference while it was still underway to meet with senators on Capitol Hill, said “What we heard from hardworking Americans, many companies are now shut down whether bars or restaurants, Americans need cash now.”  More details of the proposal are expected to be announced later today.

The White House is proposing this measure more as a “tax proposal,” rather than stimulus spending.  The Trump Administration is expected to ask Congress for $850 billion in the third round of its economic stimulus package.  The President sees this as the difference between his proposal and the $750 billion aid package New York Senate Minority Leader Chuck Schumer is planning to unveil today.

More than once Trump said “We’re going big,” when referring to his proposal.  He emphasized he did not want to meet every few days to consider the plan, but rather get at it right away.

During the press conference, Amb. Deborah Birx, Trump’s White House point person on the COVID-19 virus, appeared to refer to a report from Imperial College London, which warns that without immediate action to stem the spread of the coronavirus, as many as 2.2 million Americans could die.  By far, the biggest impact revealed in the report calls for social distancing among people, staying in small groups or avoiding groups all together whenever possible.

The White House proposal breaks down as follows:

Impasse by there every morning o. My way to work and that line is ridiculous..so glad I got everything renewed last year