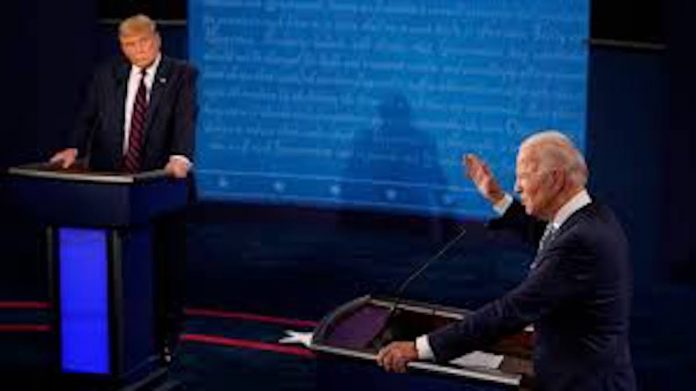 Wow.  What did the American people just watch?  That may have been the worst presidential debate in history.  It was more shouting, talking over one another, and less substantial content on important issues than the viewing public could muster.

I tried keeping count, but, alas, I couldn’t, but I think the President clearly did more of the interrupting as he tried to control the conversation.

Who won?  President Donald Trump or former Vice President Joe Biden?  Well, most analysts are saying Trump had to win this debate, as he trails in every national poll, and that really hasn’t changed for months.  But did Biden win?  His camp will say yes, but again, analysts are implying he may have won by default because Trump did not deliver that needed “knock out” punch.  They are claiming Trump bullied his way through an hour and a half.  To say Biden won tonight’s first debate is probably not accurate though, since the public really didn’t hear factual, topical “meat.”

Moderator Chris Wallace, at times, seemed overwhelmed by the lack of decorum, at least for the first two thirds of this political scrum of 90-plus minutes.  At one point Wallace clearly reprimanded the President, saying both campaigns had agreed to uninterrupted, two minute answers by each candidate.  That clearly did not happen.

The issue which may have highlighted the night was President Trump’s refusal to condemn white supremacy.  Or it may have been his attack on Joe Biden’s son Hunter’s military service.  Or was it the screaming match on mail-in ballots, their differences on health care, or the President’s claim he has brought back manufacturing jobs?  Oh, don’t forget the COVID-19 pandemic, or the President’s US Supreme Court nominee, Amy Coney Barrett.  One thing is clear, Biden did not back down, at one point telling the President to “shut up, man.”

Again, it is clear this debate was a huge embarrassment for this country.  Did voters learn anything concrete on the issues from either candidate?  And when they did find time to discuss an issue, were they being truthful with the public?  It just seemed to be an exercise in futility, almost like a school yard argument among children.

Biden’s running mate, Senator Kamala Harris told CNN following the debate, “I think the American people benefited from a very clear contrast (among the candidates).  Donald Trump spent a good deal of time bullying the moderator and lying.”  To be fair, fact checkers on the major news networks also said Joe Biden made some false and inaccurate statements.

Hudson County Republican Party Chairman Jose Arango, in a statement to Hudson TV after the debate said, “President Trump showed that he is the stronger, more decisive leader to get us out of the COVID crisis and grow our economy the next four years.  He has done it before and will do it again.  Joe Biden refuses to stand up to the radical left in his party who will keep our economy shut down while permitting violent crime to overtake our streets.  This is why we must re-elect our President.”

Prior to this evening’s debate, Senator Bob Menendez ripped into President Trump on a speech on the floor of the Senate, calling him “a liar, a cheat and a fraud,” adding that his reported indebtedness makes him a “potential national security liability.”

One can only imagine what debates two and three will bring.  If I were to guess, just more of the same.  And that’s a shame.