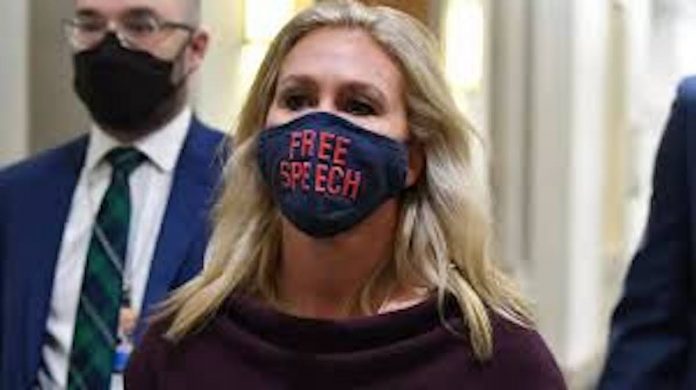 Georgia’s freshman Congresswoman Marjorie Taylor Greene has been striped of her committee assignments in the US House of Representatives.  The House voted 230 to 199 on Thursday to remove Taylor Greene from the Education and Budget Committees, with only 11 Republicans joining Democrats to support the move.

Taylor Greene, who had the support of former President Donald Trump, has been exiled from committee assignments due to her outlandish statements and actions on numerous topics.   The first-term Georgian has endorsed the executions of Democrats, including House Speaker Nancy Pelosi, and the spreading of dangerous and bigoted misinformation.  Despite her past actions, members of the Republican Party continued to support her, even after she espoused “QAnon and other conspiracy theories had pushed her party to a political crossroads”, according to a New York Times article.

Hudson County Congressman Albio Sires (D – District 8) voted with the majority yesterday, agreeing the first-term Representative needed to be removed from committees, saying “Tonight’s resolution, which removes Congresswoman Marjorie Taylor Greene from the House Committee on the Budget and the House Committee on Education and Labor, was an appropriate step after her unacceptable comments came to light. Her continued endorsement of political violence is unacceptable and must be rebuked by my colleagues across the aisle if we wish to move forward from our current political climate. Further, her comments directed at a survivor of the Parkland school shooting were disturbing and demonstrate her incapacity to serve on the Committee of Education and Labor. Tonight’s vote was a clear reprimand of senseless conspiracy theories and political violence, which have no place in the House of Representatives and our society.”

In emotional remarks on the House floor which did not include an apology last night, Congresswoman Taylor Greene expressed regret for her previous comments and disavowed many of her most outlandish and repugnant statements.  She said she believed that the Sept. 11, 2001, attacks “absolutely happened” and that school shootings were “absolutely real.”   In prior comments, the Congresswoman suggested that aspects of both were staged.

Somehow this leaves a bitter taste in your mouth as too little, too late.

Very proud to see how Seniors get their vaccine