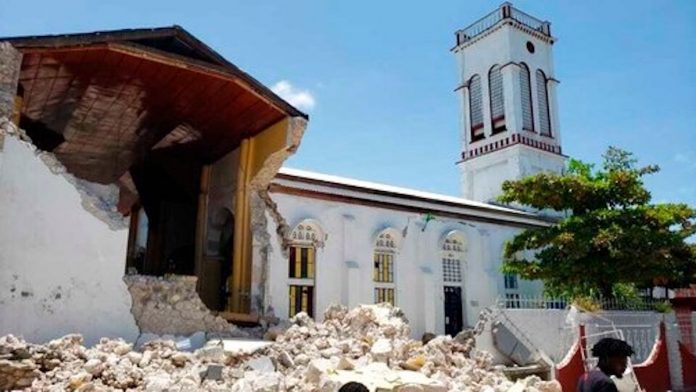 As of 2 o’clock this afternoon, at least 29 people are reported dead in today’s massive, 7.2 magnitude earthquake in Haiti.  The quake struck just a few before a tropical storm is expected to hit the Caribbean island nation.

The epicenter of the quake was about 78 miles west of the capital of Port-au-Prince, according to the U.S. Geological Survey.  Widespread damage was reported.

Prime Minister Ariel Henry has declared a one month state of emergency whole country. At a press conference, he said he would not ask for international help until the extent of the damages is known.

“My deepest condolences go out to the people of Haiti who, amid the unrest in the aftermath of the late President Jovenel Moïse’s assassination, were just struck by a devastating 7.2-magnitude earthquake. The U.S. Embassy in Haiti is already on the ground assessing the damage, but we in Congress must remain steadfastly committed to assisting the people of Haiti as they confront the effects of this disaster and attempt to rebuild their communities. Reports of casualties and heartbreaking destruction are already emerging. I call on the U.S. Government, the United Nations, and the international community at large to come together at this devastating time to support the people of Haiti in rescue, relief, and recovery efforts, and I pray for those whose families have lost loved ones during this disaster.”

President Moise’s assassination took place a little more than one month ago.