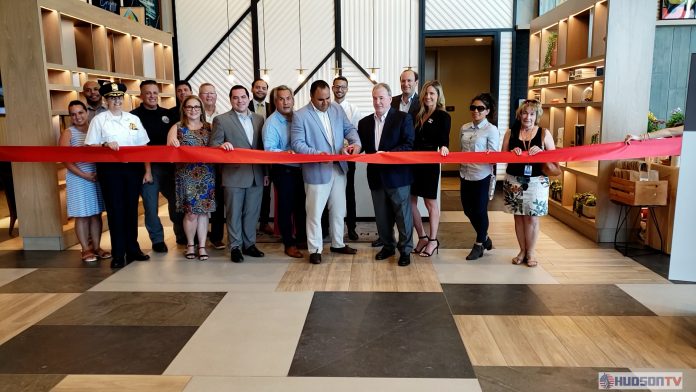 On Tuesday at noon, a ribbon cutting ceremony was held at The Capstone at Port Imperial apartment building in West New York by town and building officials.

“This is a continuation of the vision that started in 1996 to develop this beautiful waterfront” said Mayor Rodriguez. “… West New York has the best views in the world of the New York City skyline, so to have just another building here on the waterfront… a building that is going to bring 200+ retail spaces to the area and 25,000 square feet of retail space in an area that has been wanting more restaurants, more stores represents a step in the right direction…”

The luxury rental building developed by the Roseland Residential Trust, a subsidiary of Mack-Cali, features a wide range of around 360 units, from studios to four bedroom apartments, of which roughly two thirds have already been rented out.

Among the buildings many features is a 33,000-square-foot outdoor amenities deck on the fourth floor with a pool, dog park, playground, bar, cabanas, a barbeque station with multiple grills and more.

Also included among the building’s many features is a gym, a work lounge, and an outdoor lounge with a view of the New York City skyline, which is also visible from certain units.