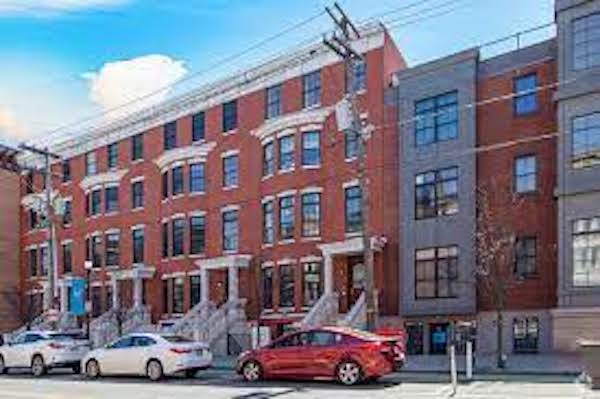 In Jersey City, like many rapidly growing cities, tenants are facing immense burdens: rent continues to rise as economic conditions become more and more unstable. Renters received little relief and no eviction moratorium during the Covid-19 pandemic, and people are still at risk of becoming infected with new variants. Gentrification and displacement by large real estate developers, subsidized by our city, are hiking up rents, breaking up our neighborhoods, and displacing long-term residents. While every person in the U.S. has a constitutional right to an attorney in criminal proceedings, legal protections for civil cases such as evictions are few and far between. No one should have to fear being kicked out of their homes, and as of right now tenants are not guaranteed legal protection when being evicted, even in egregious cases of landlord harassment, discrimination, or other mistreatment.

This policy recognizes that people can be forced out of their homes in many ways and provides representation in all of those circumstances, including for those who have received an order of eviction from their landlord or face some other form of landlord malfeasance, like unaddressed code violations or discriminatory treatment.

The Right to Counsel Campaign, based in Jersey City, is organizing a Town Hall for tenants tomorrow evening, Thursday, January 12th between 6 and 8 pm.  The event will take place at the Jersey City Theater Center located at 165 Newark Avenue.

According to spokesperson Julia Tache, “The Town Hall will include speakers on housing justice topics, open discussion/feedback from the audience, and a presentation on the Right to Counsel campaign, a grassroots effort led by the Hudson County Democratic Socialists of America (DSA) branch.

The right-to-counsel is the legal guarantee that a tenant will be granted representation by an attorney in cases of eviction. Right now, if a tenant in Jersey City is being evicted, they are not automatically entitled the right to representation in court. This leaves everyday working people vulnerable to losing their homes because they are unable to challenge their landlords’ decisions.

This campaign’s goal is to implement a citywide guarantee where all renters will be provided with representation in cases of eviction, without any barriers.”

A press release from the Campaign states the following:

“The cards are currently stacked against tenants and in favor of landlords, but Right-to-Counsel restores symmetry. Before New York City implemented their own Right-to-Counsel policy, 95% of landlords had representation during these cases when less than 1% of tenants did. Similarly, legal providers in Jersey City report that the vast majority of tenants are not represented in eviction proceedings. After implementing Right-to-Counsel, three quarters of New York City tenants elected to be represented during their eviction. When represented, tenants are much more likely to stay in their homes — as much as 41% — because lawyers can help tenants identify available defenses and additional resources like rental assistance programs. Further, in other jurisdictions that have passed Right to Counsel legislation, the overall number of eviction filings has dropped by more than 30%, likely because landlords recognize that baseless, harassing, or discriminatory evictions will no longer go unnoticed.

This issue is about economic and racial justice: neighborhoods targeted by developers are often overwhelmingly Black, Latino, and working class, and face the highest rates of evictions. Evictions lead to involuntary moves or even homelessness, making it difficult for people and families to access employment, education, and securing future housing. The vicious cycle of eviction must be put to an end.

This upcoming rally to launch our campaign and engage the public on this issue is only the beginning. We are building citywide solidarity in order to establish Right-to-Counsel and empower every person who lives here to stand up for their rights. This grassroots campaign will be run in coalition with several allied partners and local organizations to beat back against landlords, developers, and their control over our politicians. Our campaign will include canvassing, phonebanks, policy research, and the work of volunteers across the city.

Our policy proposal includes a Right-to-Counsel office established by the city where tenants will be connected to legal services and other resources like rental assistance programs. Our goal is to make sure that those responsible for the eviction crisis – landlords and developers – will cover the cost of this policy, not tenants who are already overburdened. Our mayor and council members will need to decide if they are on the side of renters and working people in their constituencies, or if they stand with landlords and developers solely motivated by profit.

New York, San Francisco, and Newark responded to the threat of rapid development and the growing eviction crisis by passing Right-to-Counsel in their cities, and Jersey City needs to do the same.” 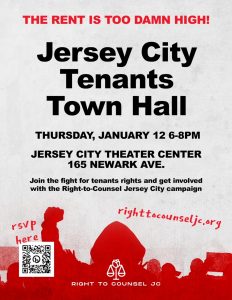