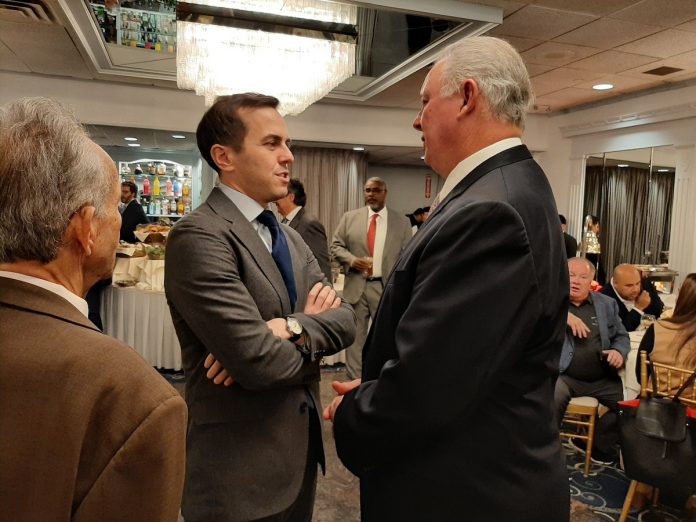 For the first time since November 2006, residents living in the majority of Hudson County, every municipality but Secaucus, along with some residing in Newark and everyone living in Elizabeth, will have a new Congressional Representative as of 12 noon tomorrow, Tuesday, January 3rd.  That’s when District 8 welcomes Jersey City’s Rob Menendez, Jr., an attorney, who takes his oath of office as the new Congressman replacing longtime Representative Albio Sires.

The constituency was represented by Sires as District 13 from 2006-2013 before becoming District 8.

Sires chose not to seek re-election for his Congressional seat, and that virtually sealed the seat for Menendez, the son of senior, New Jersey United States Senator Robert Menendez, in the overwhelmingly Democratic district.  Sires, meanwhile, is now free to officially announce what has been one of the worst kept secrets in Hudson County for months.  He is running for Mayor of West New York, a position he held from 1995 until 2006.  Sires also served in the New Jersey Legislature as an Assemblyman representing District 33 from 2000-2006, serving as the state’s, first Hispanic Speaker from 2002-2006.

In preparation for tomorrow’s swearing in, Representative-elect Menendez handed in his resignation letter as a Commissioner on the Port Authority of New York & New Jersey to Governor Phil Murphy earlier today.  Governor Murphy had nominated Menendez to a Commission seat in 2021.

In his resignation letter Menendez stated, “It has been the honor of my lifetime to serve on the Board of Commissioners for the Port Authority of New York and New Jersey.  I am proud to have represented the interests of New Jersey and our region to the best of my ability during my tenure, working alongside the Port Authority’s incredible and dedicated professional staff.”

Menendez chaired the Governance and Ethics Committee and served on the Finance Committee.  Because Congress established the interstate agency, Menendez is forbidden to hold both posts.  There are now two, vacant, New Jersey Commission seats out of six on the Port Authority Board.  Elizabeth Mayor Christian Bollwage is expected to be nominated for one of the seats since Union County is the only region with a Port facility not currently represented on the Board.