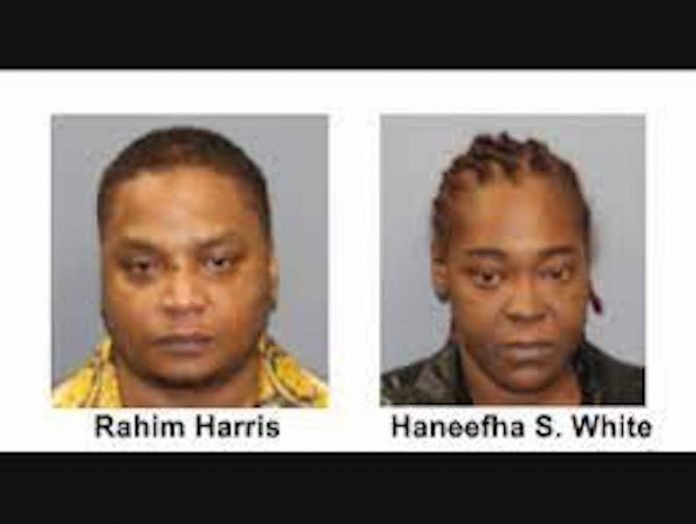 On Sunday, March 14, the Secaucus Police Department received a “tip” that Rahim Harris was a wanted fugitive and staying at the Extended Stay Hotel, located at 1 Plaza Drive in Secaucus.  According to Chief Dennis Miller, Harris had outstanding warrants for his arrest from the Essex County Sheriff’s Office for a Weapons Offense, Newark Police Department for Unlawful Possession of a Weapon, Unlawful Possession of a Handgun and Aggravated Assault for Pointing a Firearm at Another, and a Pennsylvania warrant from the Luzerne County Sheriff’s Office for Failure to Appear.

At approximately 7:09 last night, telephone contact was made with a female within the room, later identified as Haneefha S. White.   White refused to exit the room and negotiators from the Hudson County Regional SWAT Team were called in.  During the negotiations with White and Harris, they alleged they were in possession of firearms and at least one hand grenade and expressed their desire for a violent confrontation with police.  Due to the inherent danger of potential explosives, a full evacuation of the Extended Stay Hotel was undertaken and the Jersey City Police Department’s Bomb Squad responded.  Evacuees were transported by a New Jersey Transit bus to other nearby hotels.

“Due to patience, restraint and professionalism of every law enforcement officer who responded to this incident, it was brought to a safe conclusion without any injury or any force being used,” Chief Dennis Miller said. “I would like to personally thank the Hudson County Regional SWAT Team, the Hudson County Sheriff’s Office, Jersey City Police Department, New Jersey Transit Police, Alcohol, Tobacco and Firearms (ATF), Newark Division, along with Hudson Regional Hospital EMS and Secaucus and Jersey City Fire Departments for their assistance during this protracted event. This protracted event highlights the inherent danger law enforcement faces with the intent to always protect the sanctity of human life.”

“This is another example of negotiation and de-escalation tactics and training leading to a non-violent conclusion without any use of force,” said Hudson County Prosecutor Esther Suarez.  “I commend the women and men of all agencies who responded for their professionalism in this incident which also resulted in the removal of numerous illegal firearms​.”

Tips can be made by calling (201) 330-2049, emailed to spdtips@secaucus.net or submitted anonymously through the department’s website at www.secaucuspolice.org. These charges are merely accusations and the defendants are presumed innocent until proven guilty.