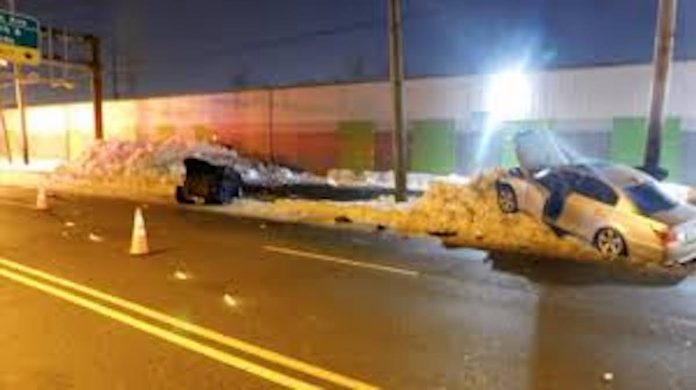 On February 9 at 10:07 P.M, Secaucus Police responded to the area of 101 Paterson Plank Road on a reported head on crash involving two vehicles.  39-year-old Mark Ortiz, of Jersey City, was driving a 2002 Honda Civic when his vehicle crossed over into oncoming traffic crashing into a 2008 BMW.  The collision sent the BMW up into a snow embankment leaving the driver, an 18-year-old Nutley resident, with minor injuries.

The passenger of the Honda, a 39-year-old Jersey City resident, was trapped in the vehicle and was extricated by the Secaucus Fire Department.  He was transported to Hackensack University Medical Center with serious, but non-life threatening injuries.

Mark Ortiz, who did not suffer any injuries, was arrested on the scene for Driving While Intoxicated. He was also charged with two counts of Assault by Auto [2C:12-1(c)(2)].  He was lodged in the Hudson County Jail.  These charges are merely accusations and the defendant is presumed innocent until proven guilty.

“I am thankful that nobody suffered serious injuries or lost their life as a result of this crash,” Chief Dennis Miller said.

Hoboken Man Arrested For Intent to Distribute Heroin at HHA

Meanwhile Americans citizens are being evicted from their homes while illegal aliens are being housed, fed and cared for by taxpayers. Liberalism truly is a mental disorder

This is the democrat voter base.. they will place these people in a newly built area together and ask Congress for more political representation causing the need to add more Senate seats giving democrats more power...🤫

Hudson county has a number of homeless children that are citizens.. what a better Representative of the people these politicians would be if they would house our own like this...🤔

No tax increase this year cause its his "election", come next year BAM new taxes