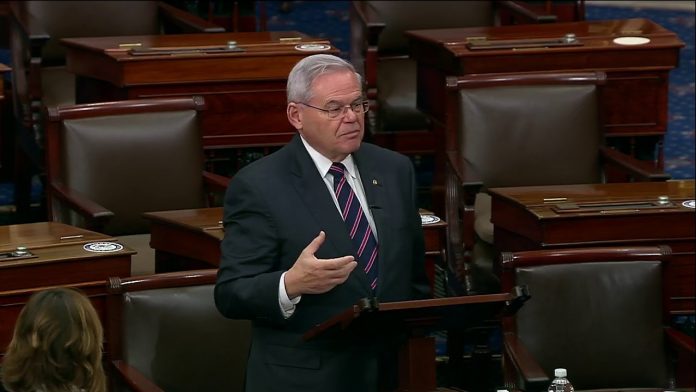 Added Menendez, “Of course, we cannot seriously talk about democratic decline around the world without confronting the stress tests on our democracy. The assault on the U.S. Capitol on January 6 was the culmination of coordinated misinformation, fueled by a systematic undermining – from the very highest office in the land – of the very foundational elements of democracy in this country including the right to vote, a free press, and our institutions themselves. Tragically, the same pattern we are seeing in democratic free falling countries.”

Below are Chairman Menendez’s remarks as delivered:

“Given the state of the world and our own country, I felt it was paramount to use my first policy hearing as Chairman this Congress to examine democracy as a fundamental American value, and how it drives our foreign policy. In every region of the world today, authoritarian governments are seizing more and more power, dismantling core democratic institutions, and closing in on civil society and freedom of expression. Many emerging democracies are plagued by scandal, corruption, and citizen disaffection. From Turkey and Hungary to Venezuela to the Philippines, autocrats are systematically dismantling constitutional checks on their power. Unfortunately, the COVID-19 pandemic has helped accelerate some of their actions by providing an excuse to consolidate power and quash free press.

Of course, we cannot seriously talk about democratic decline around the world without confronting the stress tests on our democracy. The assault on the U.S. Capitol on January 6 was the culmination of coordinated misinformation, fueled by a systematic undermining – from the very highest office in the land – of the very foundational elements of democracy in this country including the right to vote, a free press, and our institutions themselves.

Tragically, the same pattern we are seeing in democratic free falling countries.

But I would offer that our strength as Americans is our commitment to strive for that more perfect union. We take seriously our responsibility is to continually ensure that our citizens are equipped with the knowledge of their rights and responsibilities in a democratic society so that they can hold their leaders accountable. We ensure people have the right to vote and that our judiciary remains independent. And course correction when we must.

History has proven that democracies around are still more peaceful, their people are more prosperous and more secure, and it is in our national interest to champion these values.

So with that in mind as leaders around the world publicly and privately question whether the United States can still talk about democratic promotion, I say we must. It is simply in our interest. And I remind those who I have talked to around the world that have challenged the promotion that the reality is that our institutions withstood the challenges that were presented to it, from its judiciary to the Congress, to a free press in its vibrancy. All of these elements may have been tested, but they withstood the test.

Our driving question of today’s hearing is why the United States must support democracy around the world as a fundamental American value and the most effective tools we have to support democratic resilience and expansion.

Last year, I published a report documenting the steep costs the Trump presidency exacted on U.S. foreign policy and national security. Interviews with current and former U.S. officials, foreign officials, and national security experts all affirmed that President Trump’s actions made it harder to effectively champion human rights and promote democracy abroad. We largely ceded the moral ground on the global stage at a time when we needed it most to counter the authoritarian forces of Russia and China.

Today, Beijing and Moscow are driving global authoritarian expansion through increasingly sophisticated digital authoritarian surveillance and control tools and simple old-fashioned arrests of peaceful protestors and shutting down independent media. The United States must counter their malign efforts with a worldwide campaign to promote democratic values. We must also lead a serious attack on the lifeblood of these autocrats – the kleptocratic ways in which they loot public coffers to sustain themselves and erode freedom globally. We must maintain consistent and continuous pressure on authoritarian governments to stop them from abusing the rights of their citizens, and exporting disinformation and other tools of repression abroad.

Tragically, we can look around the world and see countries that may have once had so much promise overtaken by military or self-interested autocrats. The recent coup in Burma represents a direct and pressing challenge to our aim of restoring values to the center of our foreign policy.

Across the Middle East, we must not be silent in the face of human rights violations for fear of offending a security partner. Our partnerships are not blank checks. We are seeing the Egyptian government not only targeting democracy and human rights activists in Egypt, but also targeting the family members of U.S. citizens who criticize their policies.

In Saudi Arabia, I will continue to press for accountability for the murder of Jamal Khashoggi.

In Ethiopia, the path to credible elections in June has closed considerably. The ongoing conflict in Tigray, with credible reports of mass atrocities, and violence in other regions mean millions of Ethiopian voters will be disenfranchised, absent dramatic change. And, to the east, in Sudan, the civilian-led transitional government is facing serious economic and political headwinds.

Let me end closer to our own borders. As we prepare to celebrate the 20th anniversary of the Inter-American Democratic Charter in September, we have seen in the region a series of deeply flawed or fraudulent elections.

Entrenched authoritarians have clung to power in Havana, Caracas, and Managua. After six decades, Cuba remains firmly in the grasp of a dictatorship.

And nowhere in our hemisphere has democratic deterioration produced greater human suffering than in Venezuela. Maduro’s brutal criminal regime has unleashed a humanitarian crisis and has perpetrated crimes against humanity in order to silence dissent.

We have an opportunity now to reassert the U.S. role in championing democracy and human rights around the globe. We do this because it is right, and because it is in our interest. Our investments into democracy are our best hope for bolstering the stability and prosperity of our neighbors and far off countries alike, and for keeping our sons and daughters out of war. To continue to champion democracy and human rights in foreign policy, we need to have a fuller sense of the challenges we face and how the United States can best rise to face them. Shortly, we will turn to our witnesses to get their perspectives for that.

I would like to turn to the distinguished Ranking Member for his comments.”