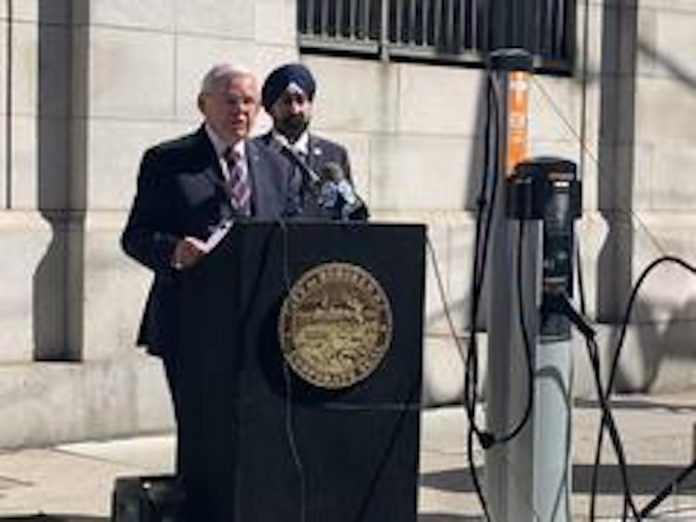 U.S. Senator Bob Menendez (D-N.J.) was joined by Hoboken Mayor Ravi S. Bhalla to highlight the $250,000 he secured to expand public electric vehicle charging infrastructure across the City. The funding, which was appropriated in the Fiscal Year 2022 government funding bill, will be used to install public DC fast charging stations that can charge an electric vehicle from 20 percent to 80 percent in only about 30 minutes.

“The major funding bill Congress passed last week included $232 million in direct federal funding to New Jersey to help create good-paying jobs, lower costs, and tackle some of our state’s most pressing issues,” said Sen. Menendez. “I’m proud to have secured this specific funding for Hoboken, which will help ease our transition to electric vehicles, reduce emissions, and create a cleaner environment for our children. I appreciate Mayor Bhalla’s leadership and vision and look forward to our continued partnership to deliver for the people of Hoboken.”

“The funding we are receiving today will make it easier to own and operate an electric vehicle in Hoboken, which will help our City reduce our overall greenhouse gas emissions,” said Mayor Bhalla. “Thank you to Senator Bob Menendez, Senator Cory Booker, and Congressman Albio Sires for securing this crucial funding on behalf of Hoboken residents and helping us achieve the goals of Hoboken’s Climate Action Plan.”

Last year, the City installed Hoboken’s first five public electric vehicle charging stations across the City. Since the first EV charging station became operational in July 2021, the program has been used more than 2,300 times. This translates to a reduction in 27,500 kilograms of greenhouse gas emissions, eliminating over 3,100 gallons of gasoline consumed. That’s the equivalent of planting 706 trees that grow for 10 years. The City will also add a minimum of six additional charging stations this year, increasing the number of charging ports to 22 citywide.

The $1.5 trillion Fiscal Year 2022 government funding package included $232 million in funding for community projects across the state. The projects make investments in health care, education, housing, green energy and water infrastructure. Ultimately, the projects will help lower costs for families and create good-paying jobs up and down the state.

Sen. Menendez was also able to secure a provision in the funding bill that gives the Hoboken flood resiliency “Rebuild by Design” project until September 2025 to spend the funding for the project, without the threat of clawback of federal funding. The Senator secured a one-year extension in the last fiscal year funding bill.

“This revolutionary $230 million resiliency project will help alleviate flooding in Hoboken by using a mix of green space and innovative structural engineering. For every dollar invested in mitigation, the federal government saves six dollars in disaster reliefs pending,” the Senator said. “This project is one giant leap forward in helping New Jersey meet the climate challenges of the21st century, and I proud to have helped Hoboken in ensuring the project is completed.”

In the past three years, Hoboken’s Climate Action Plan initiatives included the expansion of Hoboken’s residential composting drop-off program, a full ban on all carry-out plastic bags and styrofoam, the purchasing of 100 percent renewable electricity for all Hoboken municipal operations, Hoboken’s renewable energy program for residents, and energy efficient upgrades in 11 municipal buildings.