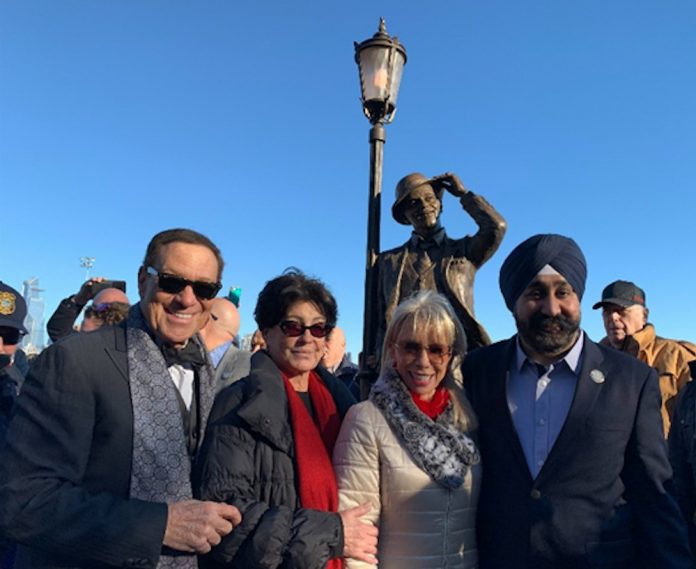 Hoboken is known for many things.  The birthplace of baseball at Elysian Fields.  The Cake Boss.  The history of its waterfront.  Italian delis.  Gentrification.  And of course, being the birthplace of one of the most iconic performers ever, the late Frank Sinatra.  On Sunday afternoon the city unveiled this statue of ‘Ol Blue Eyes in Sinatra Park along the Hudson River waterfront. 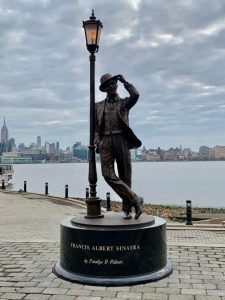 The ceremony was on what would have been Sinatra’s 106th birthday.

“It is truly a great honor to unveil this ode to Hoboken’s own Frank Sinatra,” said Mayor Ravi Bhalla. “This will not only memorialize him, but also the impact he has had on the City of Hoboken, its residents, and American society. When visitors come to take photos or tip their hats, I hope this statue inspires them to follow their passion and to work hard until they turn their dreams into reality, just like he did.” 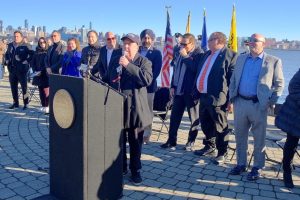 The City’s over six-foot-tall bronze monument, by internationally recognized sculptor Carolyn D. Palmer, pays homage to the American icon considered one of the greatest singers of the 20th Century. The monumental figure is depicted in a three-piece suit leaning against a flickering lamp post with his hat tipped to one side. Those who look closely will also see Sinatra wearing his pinky ring, as Sinatra’s daughter Tina Sinatra, sent one of her father’s rings to Palmer to incorporate in the sculpture. 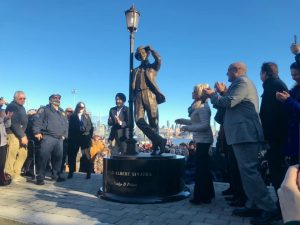 Palmer‘s extraordinary work on the Hollywood legend has been a labor of love that has taken the world acclaimed sculptor over a year to create.

“It is truly an honor to try and capture the magic of Sinatra,” said Palmer. “His music and work is so inspiring and lives on. Having been loved by everyone, this sculpture means the world to me.”

The monument is strategically placed at Sinatra Park along the Hoboken waterfront. The quintessential New York City skyline in the background reminds onlookers of his famous song “New York, New York.”

The City commissioned the Frank Sinatra bronze sculpture at no expense to the taxpayer using private donations totaling $100,000. 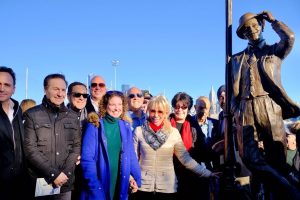 While this is the City’s first statue of Hoboken’s favorite son, the City has several tributes to Frank Sinatra, including Sinatra Park commemorated in 1998, the 1979 renaming of River Road to Sinatra Drive, and a plaque outside the location where his childhood home once stood at 415 Monroe Street, among others.

Palmer’s bronze sculptures have captivated millions, including her four papal busts on permanent installation at St. Patrick’s Cathedral in New York City, her statue of Lucille Ball in the comedian’s hometown of Celeron, NY, her sculptures of Franklin Delano Roosevelt and Eleanor Roosevelt at the FDR Presidential Library and Museum in Hyde Park, NY and more.