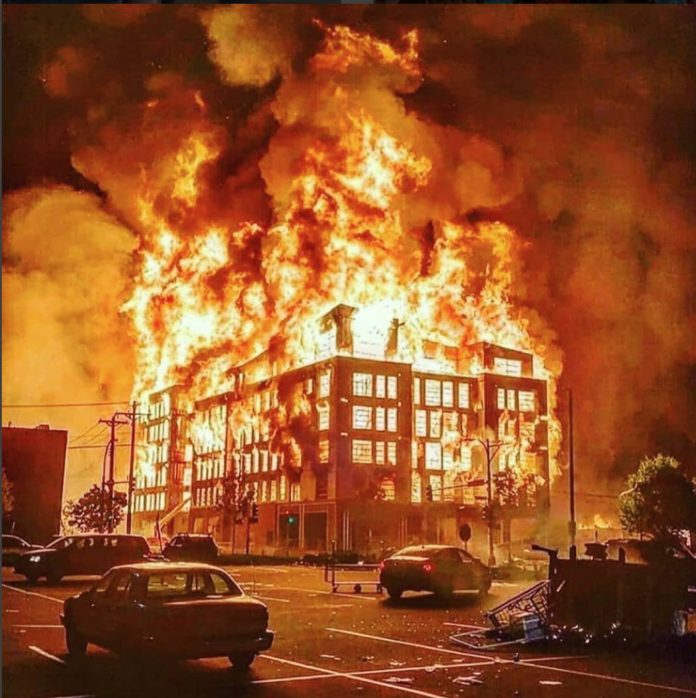 The protest demonstrations over this week’s death of George Floyd while in police custody in Minneapolis continue across the United States.  This morning, Minnesota Governor Tim Walz (D) announced he was “fully” mobilizing his state’s National Guard, the first time that has ever happened in Minnesota.

Gov. Walz stated, “it was nothing short of a blessing” that an innocent bystander hasn’t been killed during the violent unrest over the past few days.  Demonstrations and protests are occurring all across the United States following the brutal killing of Floyd, an unarmed, African American, by four Minneapolis police officers, all of whom have since been fired from the force.

One of the officers, Derek Chauvin, who is Caucasian, has been charged with third-degree murder for his part in Floyd’s death.  Video footage clearly shows Chauvin with his knee on the back of Floyd’s neck as he is face down on the street calling out for his mother and saying he cannot breathe.

The other three Minneapolis police officers who were fired are under investigation.  A civil rights investigation is underway by the FBI.

Reaction to the May 25th incident has been swift, as politicians and citizens are voicing their views on social media almost hourly.  Protests have turned violent in major cities, as police and civilians have engaged in brutal assaults against each other.

This afternoon, Congressman Albio Sires issued this statement on the Floyd killing:

“George Floyd was killed by the very people who are supposed to protect our communities. When Derek Chauvin ignored his pleas of “I can’t breathe”, he ignored Mr. Floyd’s humanity, something that happens far too often in this country. We cannot pretend to be a just and fair nation when our brothers and sisters cannot go for a jog, sleep in their own home, or live their lives without the threat of violence and death. While the violence we’ve seen taking over peaceful protests is indefensible, it is long past time for us to reckon with the deep flaws and divisions that exist in our society and justice system. For Mr. Floyd and every single soul that we have lost to racism and hate, we must actively pursue justice and work to create a world where future generations do not have to live in fear.”

On Monday at 12-noon, a “Justice For George Floyd” march will be taking place in Jersey City.  Protestors will meet at Barry Lane Park and walk up Bramhall to MLK Boulevard, then proceed up Wilkinson to Bergen Avenue, where the march will conclude at the South District Police Precinct, located at 19 Bergen Avenue.

#BlackLivesMatter will hold a demonstration on Friday, June 5th at Maxwell Place Park in Hoboken.  The “We Demand Justice” protest begins at 1 p.m.   The posters on social media ask those who plan to attend to wear face coverings and observe proper, social distancing.  Leadership for this event is asking, “If we don’t fight for justice, then who will?”