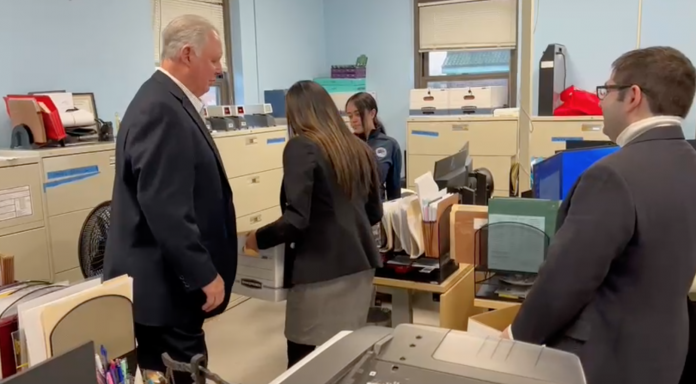 WEST NEW YORK, N.J. — The “Sires Team for WNY” slate of candidates for the West New York Board of Commissioners today filed over 6,000 signed nominating petitions, far more than the amount required to be placed on the ballot in the upcoming May election, with each candidate submitting over 1,200 petitions.  The strong total was gathered in only the past ten days since nominating petitions became available, showing a massive groundswell of community support for the Sires Team.

Hudson TV caught up with Sires slate as they dropped off their signed petitions with the West New York Clerk.

“I’m honored and humbled by the response our campaign has already received from West New York residents in just a short time,” said former Congressman Albio Sires, who heads the Sires Team for WNY ticket. “Our team is ready to step into office on day one and move West New York forward.”

“West New York residents understand how important it is to have the right team leading our community on the Board of Commissioners, and I’m honored by the support we have received so far,” said Commissioner Barrera.

Commissioner Barrera was elected in 2019 and is now running for a second term on the Sires Team.

“The people of West New York know what a true leader looks like and they understand that Albio Sires has fought for our community for his entire career as a public servant, so it’s no surprise that they are already rallying behind our campaign,” said Parkinson.

The Sires Team for WNY campaign is committed to keeping the community safe, ensuring that it remains affordable and delivering excellent services and amenities for residents.

“As a first-time candidate this has been a whirlwind experience, but I’m so inspired by the support our team is seeing from all over our community,” said Diaz. “We are looking forward to continuing to connect with residents, listen to their concerns and share our vision for West New York.”

Congressman Sires has announced several priority agenda items he will pursue as Mayor, such as building a new public library and media center, investing in local parks and recreation programs, improving local school buildings and much more.

“I’m excited to meet with neighbors throughout West New York in this campaign and spread our message of moving our community forward,” said Arroyo. “We’re not done collecting petitions yet and we will continue to connect with residents over the coming weeks.”   Arroyo ran for the Congressional seat vacated by Sires against Rob Menendez, Jr. last November, and although he was handily defeated by Menendez, he said at the time he would remain active in the local community.  That commitment to serving the community has led him becoming a Commission candidate on Sires’ ticket for the May election.