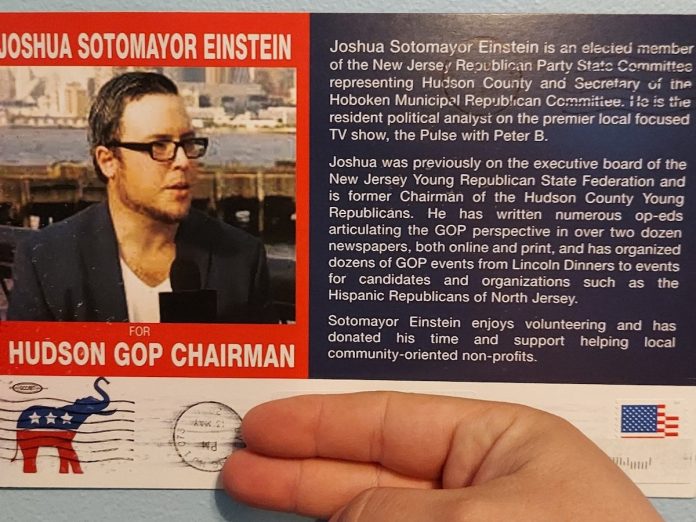 Hudson County, NJ – NJ GOP State Committeeman Joshua Sotomayor Einstein launched a mailer in the campaign to oust current Chairman, and Democrat operative, Jose Arango. The mailer, targeting GOP County Committee members and candidates comes on the heels of an open letter he previously sent to county committee members in which he laid out how grassroots GOPers and members of the committee can make the Hudson County Republican Party great again.

The mailer includes a short bio of Sotomayor Einstein highlighting his record of GOP leadership, including his tenure as a member of the NJ GOP State Committee, years of experience running GOP events, assisting Republican and Republican leaning organizations, and his public advocacy of GOP positions. The other side has a bullet point comparison between current Chair, and Democrat lackey, Arango and NJ GOP State Committeeman Sotomayor Einstein.

NJ GOP State Committeeman Joshua Sotomayor Einstein stated, “the contrast is clear, the current Hudson GOP Chairman doesn’t live in Hudson County, hasn’t built up the county GOP, doesn’t support GOP candidates, works against election integrity, has been in his position for over a decade, and works for the Democrats.” He continued, “I, on the other hand, not only live in Hudson County, but have organized the largest GOP events in over the last half decade, facilitated protests against left wing leaders such as Hillary Clinton and Bob Menendez, and I have publicly stood up for election integrity. In sum, while Arango works for the Democrats, I work to advance the GOP. It’s time for new leadership.”