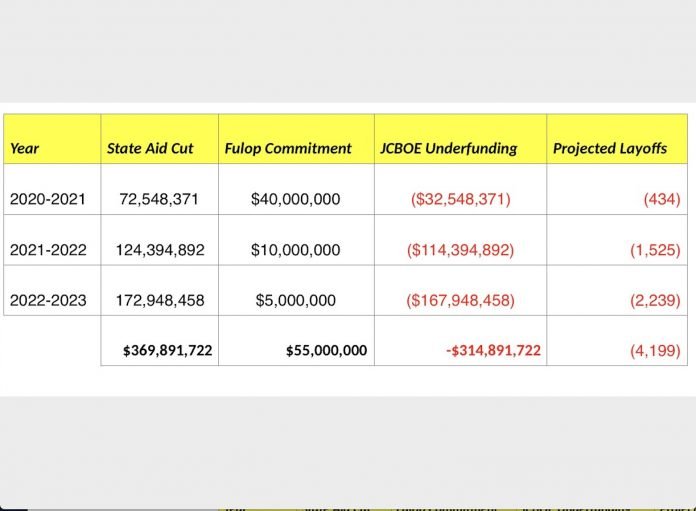 The much touted FULOP-YUN plan rolled out last week with a promise of $ 250 Million should be summarily rejected for the severe stress it places on the JCBOE essentially underfunding the schools by $314,891,722 across 3 years. The promise of $ 250 Million funding seems to be a ‘smoke screen sham’ drawing attention away from the city’s multimillion dollar financial obligations to the JCBOE.

Fulop-Yun’s plan underfunds the JCBOE by over $ 32 Million for the new school year 2020-2021 which will potentially trigger 434 layoffs. The plan appropriates a total $ 55 Million in Payroll Tax payments for the next 3 years. The projected state adjustment aid (S2) cuts to the Jersey City School across the next 3 years total $369 Million. The plan underfunds the JCBOE by over $ 314 Million. The City additionally owes the JCBOE $3.5 Million for the 2018-2019 school year.

Over the next 3 years the plan will eviscerate the JCBOE and wipe out 4,199  jobs quiet much leaving behind nothing raising the scepter of what we saw go down in Newark 10 years ago under Christie-Booker-Cerf.

*State Adjustment Aid cuts and required Payroll Tax Certifications by the City were communicated to the Mayor on January 02, 2020.

The Fulop-Yun plan calls for $ 25 Million in cuts to the 2020-2021 budget in total calling for $ 55 Million in funding over the next 3 years without any dialogue or communication with the JCBOE. Sounds arbitrary and capricious?  I have I have personally testified in every state/senate finance committee  hearing since 2018 outlining the JCBOE’s all-encompassing approach to funding challenges including operational efficiencies, elimination  of waste, HR optimization, legislative and legal efforts.

The budgets of 2018-2019 with a deficit of $ 70 Million and the budget of  2019-2020 with a deficit of $ 120 Million were solved for by  the collective efforts of the Board with no layoffs. Over the last 2 years, under my Presidency, the JCBOE undertook a comprehensive operations efficiency audit and effectuated the following budgetary efficiencies and elimination of waste totaling $ 65 Million as listed below. 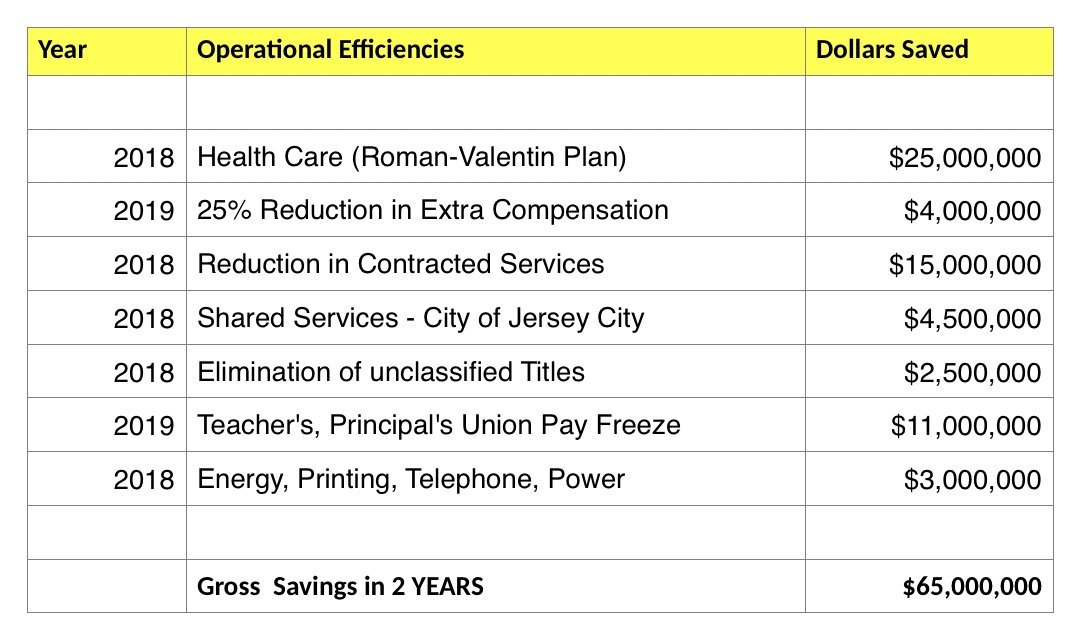 Fulop-Yun seems to suggest a maximum cap of $ 25 Million in Property Tax increase in school tax levy. The increase in School tax levy is an authority solely vested with the school board whom the Citizens of Jersey City have elected and put in place. The Board has 2 years left to draw down the $ 300 Million made available in BANK CAP and should not be imposed with local caps when the state has eliminated the previously in place 2% cap solely for Jersey City.

FULOP-YUN plan is silent on the JCBOE audit of the top 19 PILOTS which identified $ 51 MILLION in potential back taxes while still not producing the compliance documents for the remaining 150 PILOTS.

Three years ago the City’s Tax Assessor, Maureen Cosgrove made a similar determination of overdue, out of compliance PILOT payments. It is evident the City has not been able to correct the mistakes of the past and the clock has stood still after Ms. Cosgrove left in 2016 over a cloud.

The 2% increase in property  tax on the citizens by the City last year in 2019  begs the question if the increase  came at the cost of a continuing free ride to the PILOTS/Abatements – Developers/Builders. This administration has already been under question for the delay in the land revaluation which kind of extended a tax holiday to the developers and now it seems there is a tax holiday on the building payments as well?

Do my bidding if not?

The Mayor’s veiled threat in his letter to a group of folks to replace the elected Board with an appointed Board if they do not follow his plan sets a dangerous precedent; Ominous parallels to what is witnessed in Trump-Dom.

In closing City Hall needs to put its house in order. Fix the out of compliance PILOTS issue among others. The singular most important thing the Mayor and his council should focus on is to certify the $ 72 Million Payroll Tax to avoid 434 layoffs and to play a supportive role but not an adversarial role.

We have 2 very capable African American men at the helm of the JCBOE in Superintendent, Franklin Walker and Board President, Lorenzo Richardson. City hall should let them do their jobs without constantly berating, second guessing and threatening them.

Guest Columnist is the Former President of the Jersey City, Board of Education (JCBOE); Board of Directors, New  Jersey, School Board Association (NJSBA)