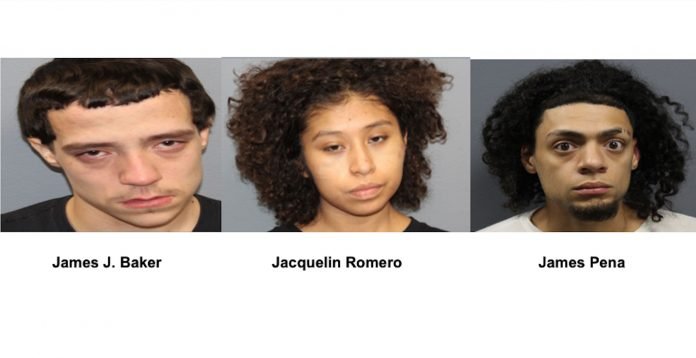 At approximately 9:52 P.M. on August 8, 2020, two victims entered the Secaucus Police Department and stated that they were robbed at gunpoint in the backyard of a residence on the 700 block of 3rd Street.  One of the victims suffered a minor head injury during the robbery when he was struck with a handgun.  During the robbery, both victims’ sneakers and several thousand dollars’ worth of jewelry were stolen.

Just after midnight on August 9, 2020,  Secaucus Police Officers who were conducting surveillance in the area of a suspect’s residence on 3rd Street, obeserved James J. Baker exit the residence wearing the same clothing as one of the supsects, along with sneakers that were reported to be stolen by one of the victims.  James J. Baker was found in possession of a handgun in his waistbaind and arrested.  At the time of his arrest, James J. Baker was wearing a necklace belonging to one of the victims. He was also found in possession of a “switchblade” knife, a hatchet, a quantity of suspected marijuana and Alprazolam pills.  A search of another suspect’s residence was conducted on 3rd Street by members of the Secaucus Police Detective and Patrol Divisions and the Anti-Crime Unit.  During the search, jewelry and a pair of sneakers that belonged to the robbery victims were located. Additonally, a quantity of suspected marijuana along with a handgun loaded with “blank” ammunition were seized.  As a result, James Pena and Jacquelin Romero were placed under arrest.

“I want to thank the Hudson County Regional SWAT Team and Hudson County Sheriff’s Office SWAT Team for their assistance in this investigation,” Chief Dennis Miller said.  “I also want to commend the collaborative effort between the different divisions and units within the Secaucus Police Department, which directly led to these arrests within hours of the initial report.”