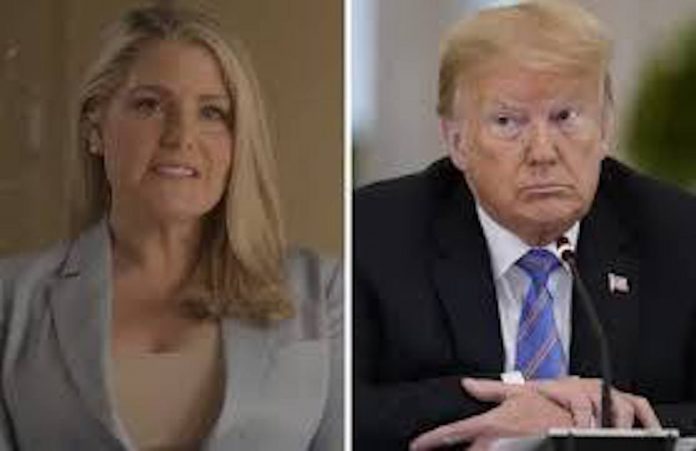 Is this what our Presidential Election has come to America?  First the Democratic Presidential Nominee, former Vice President Joe Biden, and now Republican President Donald Trump, being accused of sexually assaulting women.

In a Guardian exclusive published on Thursday morning, former model Amy Dorris says Trump assaulted her at the US Open in New York City, 23 years ago.  She alleges Trump “forced his tongue down her throat and groped her” at the tennis event.  24-years old at the time, Dorris told the publication the alleged incident left her “feeling sick and violated.”

Dorris says the incident took place on September 5, 1997 outside of a bathroom in Trump’s VIP box.  The 44-year old says Trump assaulted her all over her body and held her in a grip she could not escape from.

“He just shoved his tongue down my throat and I was pushing him off. And then that’s when his grip became tighter and his hands were very gropey and all over my butt, my breasts, my back, everything.  I was in his grip, and I couldn’t get out of it,” she said, adding: “I don’t know what you call that when you’re sticking your tongue just down someone’s throat. But I pushed it out with my teeth. I was pushing it. And I think I might have hurt his tongue.”

Trump, who was 51-years old at the time of the alleged incident, was married to his second wife, Marla Maples, at the time.  The President, through his attorneys, has strongly denied the alleged sexual assault ever happened.

In March of this year, Biden was accused of sexually assaulting Tara Reade in 1993 when Biden was a United States Senator from Delaware.  The alleged incident reportedly took place in Capital Hill office building when Reade was a staff assistant in Biden’s Senate office.  Last year Reade came forward, saying Biden touched her in ways that made her feel uncomfortable.  She never mentioned the alleged incident at the time, but this past April she said she told Biden’s Senate staff about harassment when it allegedly occurred.

Biden, during a May 14th interview, said he did not remember Reade.