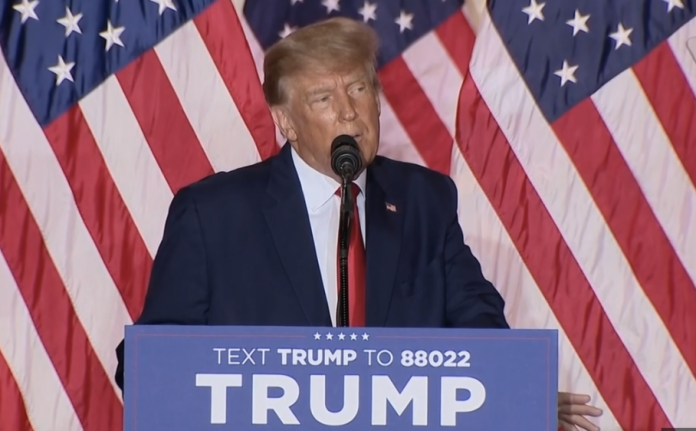 Despite disappointing mid-term election results for the Republican Party nationwide, former President Donald Trump tonight announced his intention to run for President in 2024, even as a growing number of Republicans are urging the GOP to look elsewhere in light of their 2022 midterm failures.

Many Republicans are blaming Trump and “Trump-like” candidates for the party’s poor showing in the mid-term elections.  A large percentage of Republicans seeking a new leader are turning to Florida’s Governor Ron DeSantis, who won re-election with more than 59% of the vote.  Once a huge supporter of his, Trump has already started attacking Governor DeSantis.  Trump’s Vice President, Mike Pence, has not announced if he will be a candidate in 2024, but told ABC’s David Muir on Monday night, “I think we’ll have better choices in the future” than Trump.

Tonight at Mar-a-Lago in Palm Beach, Florida, in his trademark navy blue suit and red tie, Trump stated, “America’s comeback starts right now.”  Trump stated, “America was prospering. Under my leadership we were a strong, prosperous nation.  Under two years of Joe Biden, inflation is the highest in years.”  Trump criticized the situation in Ukraine.  He added that under the current President, “He is leading us on the brink of nuclear war.”

At 9:22 pm, Trump announced he is officially seeking the Presidency once again.  “In order to make America great again, I am announcing my candidacy for President of the United States.”

Trump is the first, former President to announce he will seek a return to the Oval Office since Herbert Hoover, who, at the 1940 Republican National Convention, hoped for the presidential nomination.  It went to the internationalist Wendell Willkie, who lost to Franklin D. Roosevelt in the general election.  Grover Cleveland is the only American President to hold the office in two, non-consecutive terms.

It is Trump’s third Presidential campaign.  He is the only President to have been impeached twice.

In the mid-term election results, Republicans were unable to retake control of the Senate, even though they only needed to gain one seat.  Republicans control the House, but only by a handful of seats.