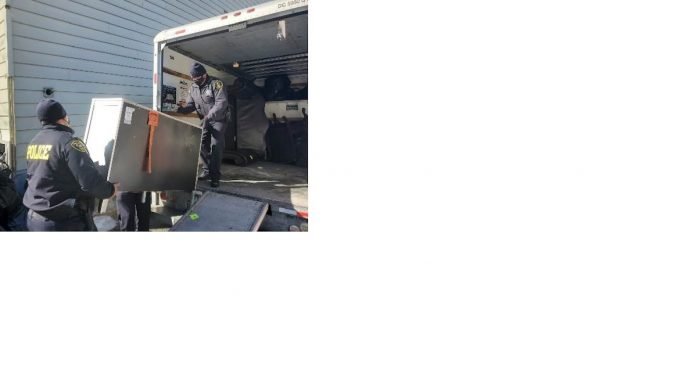 (UNION CITY, NEW JERSEY) – The Union City Police Department arrested and charged the owner of 508 Bergenline Avenue, Ron Bello, with burglary, theft, receiving stolen property and unlawful eviction over an incident that took place on or around February 3rd resulting in the illegal eviction of his tenant, Milka Camposano, and the removal of all her belongings from her apartment.

On February 3, 2021, a friend of Ms. Camposano, knowing she was out of the Country, alerted the Union City Police Department of a possible burglary in her apartment.  The Police Department found evidence of a burglary and additionally, found residential furniture and black garbage bags in the rear of the building.  As with all burglaries, the Detectives canvassed the neighborhood, reviewed surveillance cameras and spoke with all involved parties.  Neighbors in the area were able to assist in the investigation and provide additional leads.  After hours of investigation by the Detective Bureau, probable cause developed to charge the building owner, Ron Bello.  Fortunately, the Detective Bureau was able to return multiple items of monetary and sentimental value to the victim.

Ms. Camposano was not properly served with an eviction notice, but was informed of her illegal eviction and removal of her belongings while on her way back from a trip overseas.  Mayor Brian P. Stack and the City of Union City immediately filed an Order to Show Cause to have Ms. Camposano returned to her apartment to seek damages. On February 4th, Judge Marybeth Rogers ruled in favor of Ms. Camposano and ordered that the owner return her to her apartment immediately, however, Ms. Camposano could not return until February 8th because there was no heat or electricity in her apartment.  Judge Rogers has indicated that she will set a date for the matter to go to trial on the issues of the eviction and damages for the removal of Ms. Camposano’s property.

“Once again, a successful effort by the Union City Police Department,” said Mayor Brian P. Stack.  “The building owner’s actions are inexcusable and unjust and I am confident that we will prevail in this matter. No one deserves to be evicted without proper notice, have a building owner or landlord enter their apartment without their knowledge and have all of their possessions removed.  It is unfair and unacceptable and a clear message must be sent to all owners and landlords that it will not be tolerated.”