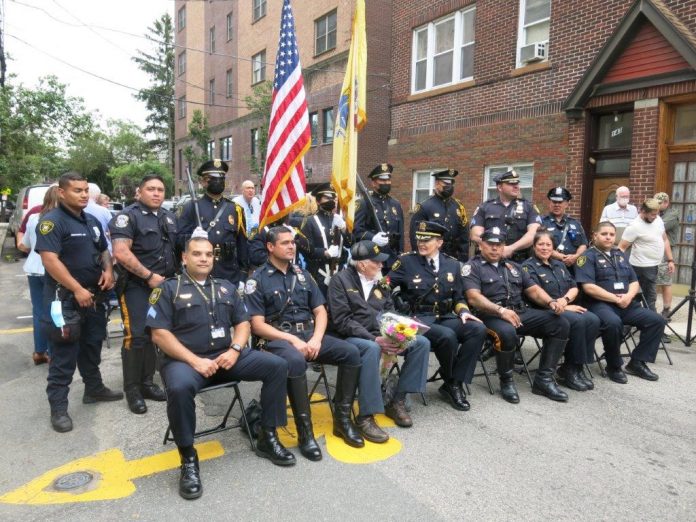 Frank Korker served the City of Union City as a police officer for 35-years, retiring as a lieutenant.  As part of the Greatest Generation, he enlisted in the Coast Guard at the age of 21.  As a machinist second class, he delivered hundreds of American troops to Utah Beach for the invasion of Normandy, in 1944.  On June 11th, the eve of his 100th birthday, he was surprised and honored by city commissioners and the Police Department as the corner of 38th Street and Hudson Avenue was named, “Lieutenant Frank Korker Way.”

Koeker was born on the 100-block of 38th Street, on the same street with Union Hill High School.  He was a star athlete during his high school years.

After returning from the war he became a city police officer.  He was always proud of the uniforms he wore-always pressed and shined shoes.  Korker was known for walking around police headquarters, wearing his hat.  One of his sons presented Korker with his lieutenant hat to wear during the ceremony.  He retired as commander of the Traffic Division.

A motorcycle escort, along with a department Honor Guard, brought the retired lieutenant, who was riding in a modern police vehicle filled with computers and gadgets, to the intersection.

Current and retired police officers, city workers and friends gathered at this street corner to celebrate Lt. Korker’s 100th birthday and a street named in his honor.